Shavit should have been discredited long ago, for his lies and Israel bashing

From Israel Hayom, 31 Oct 2016, by Ruthie Blum, managing editor of The Algemeiner:

It is an astounding commentary on our times that Israeli journalist Ari Shavit has been shamed publicly -- to the point of losing his livelihood -- for making unwanted passes at two women, when the best-selling author of "My Promised Land" should have been ousted two years ago for the book's lies about the Jewish state. 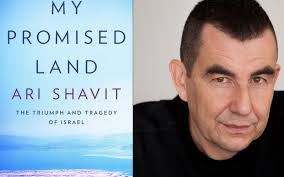 Though the book was, and should have been, cause for Shavit to be discredited professionally, nobody blinked an eye at that travesty, detailed so beautifully by Middle East expert Martin Kramer in Mosaic Magazine in 2014.

On the contrary, Shavit suffered no consequences when Kramer exposed his false narrative. The one that kept the awards, lecture-circuit gigs and accompanying cash flowing like a brook on a spring day.

As Kramer put it, "Beyond Shavit's powerful writing style and engaging personal manner," what he really achieved was an "artfully mixed effect" of "confessing Israel's sins in order to demonstrate the tragic profundity of his love."

Kramer went on to dissect the 30-page chapter titled "Lydda, 1948" about "an alleged massacre of Palestinian Arabs that preceded an act of forcible expulsion," refuting its errors and highlighting the questionable research behind it.

This did not put a dent in Shavit's busy schedule as a columnist and editorial board member at Haaretz; a regular panelist on Israel's Channel 10; and a perpetual traveler to conferences abroad, where he was given standing ovations and hosted by prominent and wealthy Jews, thrilled to be provided with the excuse to bash Israel while professing to be on its side.

...Shavit ...is clearly as clueless about seducing women ...as he is disingenuous about his politics. His disgrace for the latter was long in coming. Too bad nobody will remember that part of his downfall.
Posted by Steve Lieblich at 11:34 pm