Time is on Israel's Side 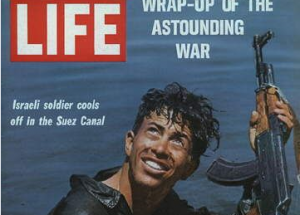 
Considering the ways Israel’s opponents have changed over the decades, the collective yearning among Israelis for a decisive, 1967-style victory is unrealistic. The false hope for such success impedes clarity of thinking and causes the Israeli public to lose confidence in both the military and the political leadership. The only approach that can succeed in Israel’s current conflicts is a patient, attritional, repetitive use of force. Israelis should take comfort that time is on Israel’s side....

The unrealistic anticipation that victories on the scale of 1967 should be the end result of any military engagement hampers clear thinking and impedes the adoption of appropriate strategy and tactics. Moreover, it encourages what is often an impossible hope for a quick end to conflict. In the absence of a clear-cut and speedy outcome, Israelis lose confidence in the political as well as the military leadership.


Israelis, many of whom have limited military experience, still long for decisive victories in the Gaza and South Lebanon arenas. The wars in which the IDF has participated so far in the twenty-first century, which appeared to end inconclusively, left many Israelis with a sense of unease. They miss the victory photographs of the 1967 war....

Hamas and Hezbollah do not possess arsenals of tanks and air fighters, which would be easy targets for Israel. The decentralized structure of their military organizations does not present points of gravity that can be eliminated by swift and decisive action. Moreover, their use of civilian populations to shield missile launchers and military units – a war crime – makes IDF advances cumbersome and difficult due to slower troop movement in urban areas and the need to reduce collateral damage among civilians. Urbanization among Israel’s neighbors has greatly reduced the empty areas that could have been used for maneuvering and outflanking. The use of the subterranean by Israel’s foes, be it in Gaza or South Lebanon, is another new element that slows advances.

It is naïve to believe the IDF can or should win quickly and decisively every time it has to flex its muscles. Yitzhak Rabin warned several times during his long career against the expectation of a “once and for all” victory.

Israel is engaged in a long war of attrition against religiously motivated enemies who believe both God and history are on their side. All the IDF can do is occasionally weaken their ability to harm Israel and create temporary deterrence. In Israeli parlance, this is called “mowing the grass” – an apt metaphor, as the problem always grows back.

The patient, repetitive use of force is not glamorous, but it will eventually do the trick. Unfortunately, many Israelis do not understand the particular circumstances of the great 1967 victory. They have lost patience and do not realize that time is, in fact, on Israel’s side.
Posted by Steve Lieblich at 3:57 pm No comments:

The Muslim Brotherhood has operated as a terrorist entity for almost a century.

What to make of the Muslim Brotherhood (MB)?

The Muslim Brotherhood was founded in 1928 by Hassan al-Banna (third from left). An Egyptian schoolteacher from a rural town north of Cairo, Banna engaged in Islamist activities from a young age, joining a local group that intimidated and harassed Christians and non-observing Muslims in his hometown.

During the Obama years, it became commonplace for the U.S. administration and its Western acolytes to portray the Muslim Brotherhood as a moderate option to "more radical" Muslim groups. Thus, for example, U.S. director of National Intelligence James Clapper incredibly described the organization as "largely secular" while John Esposito of Georgetown University claimed that "Muslim Brotherhood affiliated movements and parties have been a force for democratization and stability in the Middle East."

On the other hand, in 2014, the United Arab Emirates formally designated the Muslim Brotherhood and its local and international affiliates, including the U.S. based Council on American-Islamic Relations (CAIR), as inter-national terrorist groups. A British government review commissioned the same year similarly asserted that


parts of the Muslim Brotherhood have a highly ambiguous relationship with violent extremism. Both as an ideology and as a network it has been a rite of passage for some individuals and groups who have gone on to engage in violence and terrorism.

The question is—which view is correct? Without doubt, the second one is.

The Muslim Brotherhood has been a militaristic organization since its inception and has operated as a terrorist entity for almost a century. It influenced the establishment of most modern Sunni terrorist organizations, including al-Qaeda, al-Gama'a al-Islamiyya (GI) Hamas, and the Islamic State (ISIS). These organizations have either been founded by current or former Brotherhood members or have been directly inspired, indoctrinated, or recruited by MB members and literature. Contrary to what the MB propagates to Westerners, MB violence is not just in the past but is an ongoing activity...

Follow the link for the full article including history and detailed analysis.
Posted by Steve Lieblich at 4:43 pm No comments:

Jews Against "the Occupation" = Jewish anti-Zionism

Fifty years after the Six Day War, the American Jewish community is sharply fragmented, with many Jews grappling with where Zionism fits into their Jewish identity. As the Boycott, Divestment and Sanctions (BDS) movement grows in popularity and attracts more Jewish advocates, the gap is growing even wider between American Jewry and Israel.

For American Jews, Zionism has become a source of debate, controversy, embarrassment, and guilt as they try to come to terms with the activities of the Jewish state and its elected officials. Consequently, many seek to detach themselves from what used to embody the core of Jewish identity. A case in point is Jewish Voice for Peace (JVP), a pro-BDS Jewish group that uses its “Jewishness” to validate its cause.

...JVP’s executive director, Rebecca Vilkomerson, is notorious for her hard leftist views, as illustrated in her Washington Post op-ed entitled “I’m Jewish, and I want people to boycott Israel.” So strong is JVP’s antipathy to Israel that the Anti-Defamation League (ADL) has called it “the largest and most influential Jewish anti-Zionist group” in the US.

...The difference between Herzl’s generation and post-1948 generations was a first-hand understanding of what the absence of a Jewish state means for Jewish survival. The state represents the difference between autonomy and servility, indeed between life and death. But today’s millennial generation has no memory of a time when Israel did not exist or was ever on the “right side of history.”

Given the wedge that has been pushed between Zionism and Judaism, one might even suggest that were Herzl to raise the question of a Jewish homeland today, he might not receive support. The irony is that what initially led Zionist leaders to bond over the idea of a homeland was the growing threat of antisemitism. Today, even as antisemitism is on the rise around the world, anti-Zionism is often viewed as legitimate criticism.

Abba Eban dispelled this notion eloquently, stating, “There is no difference whatever between antisemitism and the denial of Israel's statehood. Classical antisemitism denies the equal right of Jews as citizens within society. Anti-Zionism denies the equal rights of the Jewish people its lawful sovereignty within the community of nations. The common principle in the two cases is discrimination."

But with the popularity of the BDS movement’s crusade against Israel, some American Jews on the left have placed other Jews beyond the pale, as people who cannot be debated due to their abominable views. Moreover, an insidious double standard applies: Jewish organizations like Hillel must include anti-Israel voices or be deemed intolerant or racist. Jewish intellectuals must engage in dialogue with BDS representatives or other Palestinian advocates who demand the ethnic cleansing of Israel, lest they be called cowards and be subjected to insults. And now, leading American Jewish intellectuals have adopted the rhetoric and methods of BDS, to be applied to Jews only. Perhaps the next move will be to follow the Palestinian lead and charge Israelis in international courts.

Individuals like Peter Beinart, in his book The Crisis of Zionism, purport to offer so-called “tough love,” an approach that is supposedly required to curb the alleged expansion of the "occupation.” Driven by guilt, Beinart has embraced the left’s move to distance itself from Israel and the Zionist enterprise at large. For Beinart, the answer is a "Zionist" boycott of Israeli settlements and products.

Beinart, like many post-Zionists and revisionists, only opposes the "occupation," which leads him to place all the onus for the lingering Palestinian-Israeli problem on Israel. In this distorted narrative, Israel is largely to blame for the collapse of the Oslo/Camp David process of the 1990s-2000s and for the subsequent failures to revive the peace process. But the centrality of the “settlements” is an empty issue. It deflects from the core problem that truly obstructs a negotiated settlement: the Palestinians’ century-long rejection of a sovereign Jewish state.

...Anti-Zionist American Jews have found Israeli counterparts even in the Knesset. This was on display at the AIPAC Policy Conference in late March, at which Meretz MK Tamar Zandberg, whose trip to the conference had been paid by AIPAC, decided to join a protest outside the conference. At the protest, organized by the Jewish anti-establishment group IfNotNow, demonstrators held up signs reading “Reject AIPAC” and “Reject Occupation.” Zandberg justified her decision to participate by saying, “there is no greater deed of patriotism than opposing the occupation.”

Stronger Zionist anchors are needed within the Jewish community to overcome the guilt over Israel’s existence rather than its actions. Collective historical memory is absent from today’s discourse on Zionism, especially in America. While there are Zionists on the left and right who still appreciate Jewish history and believe in Jewish destiny, Zionist renewal outside Zion is needed. There is a serious need to teach and appreciate both Herzl’s Zionism and “Start-Up Zionism” if the dream is to be kept alive.
Posted by Steve Lieblich at 7:05 am No comments: