The Middle East: There will be chronic instability for a long period of time.

From the transcript of a 20 March 2017 BICOM briefing with Moshe Ya’alon*:

The Middle East is going through the greatest crisis since the days of Muhammad. We’ve seen the Arab Spring become the Islamic Winter. We have witnessed ongoing internal conflicts, including the Syrian civil war, which has produced more than half a million casualties and has resulted in the majority of the Syrian population becoming refugees, some within the country, others in Lebanon, Jordan, Turkey and Europe.

I don’t see an end to this crisis. There will be chronic instability for a long period of time. I don’t see stable transition from the tyrannical regimes which have been removed. I don’t see a return of the old ideologies of Nasserism and Pan-Arabism. And those who believe that ‘Islam is the solution’ are frustrated.

What we see today is a conflict between three different radical Islamist movements each seeking hegemony in the Middle East and beyond.

First, there is the Iranian ideology that seeks to export the “Islamic revolution”. They have reason to feel they have been successful so far. As well as Tehran, the Iranian regime is dominant in Baghdad through the Shi’a government, in Damascus by supporting President Bashar al-Assad, in Beirut through Hezbollah, and in Sana’a [in Yemen] through the Houthis. Iran is challenging the US in the region; we see them firing at American vessels. A grave concern for the region is Iran’s aspiration to develop a military nuclear capability. There will be a delay for about a decade as a result of the 2015 nuclear deal, but Iran will remain a serious challenge for Israel, for the Sunni Arab regimes and for the Western world. Iran’s belligerency is the result of the vacuum created by the former US administration. At present we have little idea of the current US administration’s policy, so Iran will see what it can get away with in the meantime.

The second radical Islamic movement seeking hegemony in the region is the Sunni jihadists; whether it is ISIS or Al-Qaeda, their aim is to impose an Islamic caliphate in the Middle East and beyond. ISIS succeeded in establishing Islamic State (IS) in Iraq, Syria, Sinai and Libya. The Sunni jihadists – especially ISIS – have too many enemies in the region. However, the fight against ISIS continues.

The third element is Turkey. President Recep Erdoğan is the leader of the Muslim Brotherhood in the region, and seeks to create a neo-Ottoman empire based on the ideology of the Muslim Brotherhood. He has acted with this goal in mind for a long time. He supported ISIS economically by buying oil because they were willing to kill the Kurds. He allowed trained and experienced jihadists to come from all over the world to join ISIS to fight in Syria and Iraq, and to go back to their own countries, especially to Europe, and we have witnessed the consequences of this.

These developments are consequences of the vacuum created by the US. I’m not sure what will come now with the current administration. We must wait and see....

*Ya’alon is a former IDF Chief of Staff, and served as Israel’s Defence Minister from 2013 to 2016 until disagreements with Prime Minister Benjamin Netanyahu led to his resignation. Ya’alon has announced the formation of a new political party and his intention to run for Prime Minister. He is likely to have a major role in determining the composition of the next government in Israel. In this briefing he discusses the security challenges facing Israel and the wider region and the prospects for resolution of the Israeli-Palestinian conflict.
Posted by Steve Lieblich at 8:57 am No comments:

The Other Islamic State: Erdogan’s Vision for Turkey

The strongman wants to reverse the country’s secularization and cement his authoritarian rule. 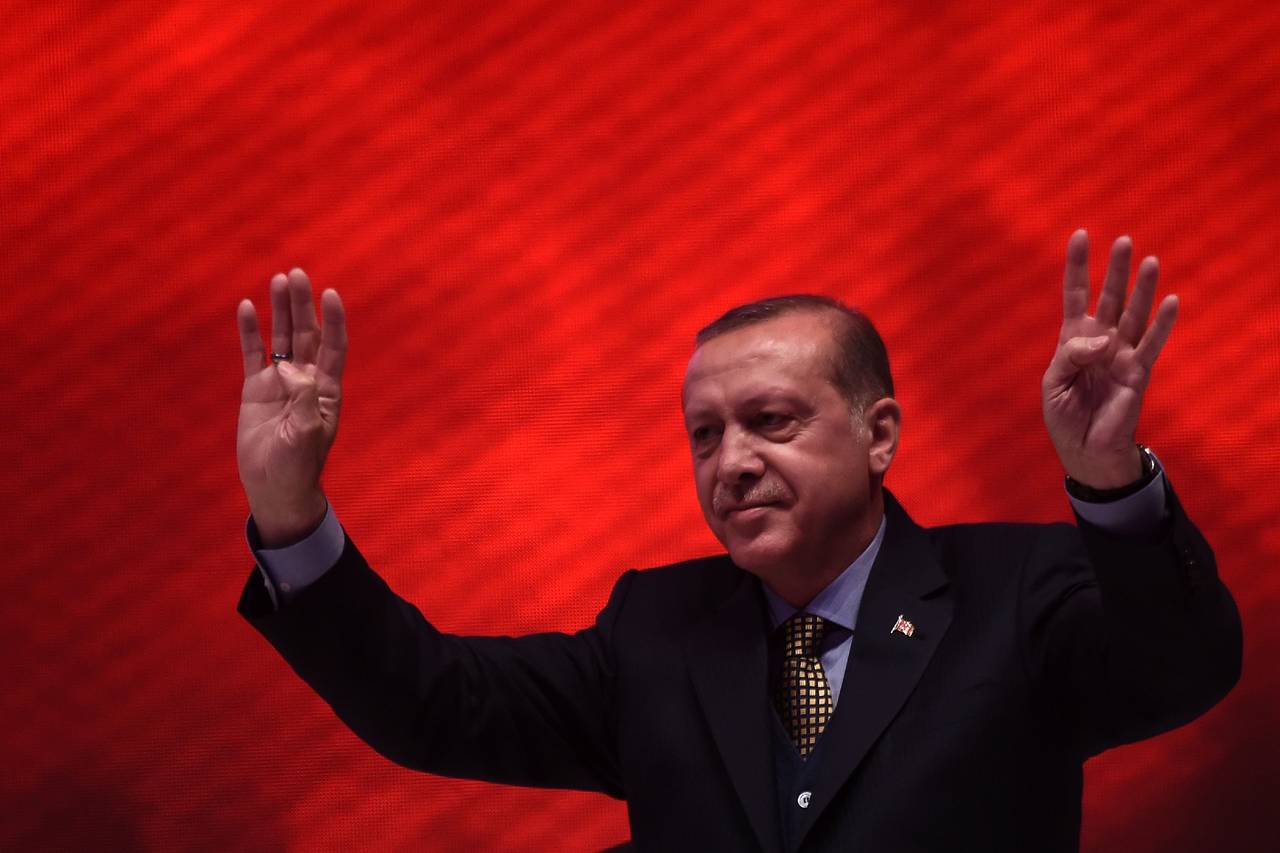 The Turkish president at a rally in Istanbul, April 12.
PHOTO: AGENCE FRANCE-PRESSE/GETTY IMAGES

This Sunday, millions of Turks will vote to endorse or reject constitutional amendments passed in January by Turkey’s Parliament. ... Turkish President Recep Tayyip Erdogan years ago arrogated all the powers that the constitutional changes would bestow on him. He is already lord of all he sees for as long as he wants, whether through democratic means or by fixing election results. If the referendum passes, it will merely prettify that reality.

Consider the nature of Mr. Erdogan’s power. The obsequious prime minister, Binali Yildirim, tirelessly advocates for the constitutional changes that will eliminate his own office, historically the most powerful in the country. Criticism of the almighty president can get even a child thrown into jail. The most tenuous connection to a (possibly staged) coup d’état attempt last July means losing one’s job—or worse. The state routinely jails journalists on the bogus charge of terrorism, and truly independent publications are shuttered.

If Mr. Erdogan has no need for constitutional changes, which amount to a legislative triviality, why does he obsessively chase them? Perhaps as added insurance against ever being hauled into court for his illegal actions. Perhaps to assure a handpicked successor the power to continue his program. Perhaps to flatter his vanity.

Whatever the source of Mr. Erdogan’s compulsion, it greatly damages Turkey’s standing in the world. When his aides were not permitted to rally Turks living in Germany for the constitutional changes, he accused the Germans of “employing Nazi measures.” He also compared the Netherlands to a banana republic after Turkish ministers were prevented from speaking in Rotterdam. This souring of relations has already led to a breakdown in military ties with Germany.

Implicitly threatening street attacks on Europeans hardly helped Mr. Erdogan’s international standing, nor did allowing one of his close allies to call for Turkey to develop its own nuclear weapons. More damaging yet, the leader restarted a civil war with the Kurds in July 2015 as a gambit to win support of a nationalist party in Parliament, a move that has already had dreadful human consequences.

This insistence on doing things his way fits a pattern. Mr. Erdogan could have won visa-free travel for Turks traveling to Europe, but he refused a meaningless change to the definition of terrorism in Turkey’s criminal code. He harms relations with Washington by making the extradition of Turkish cleric Fethullah Gulen a personal fixation. He potentially disrupts relations with 35 countries by setting his intelligence agencies to spy on pro-Gulen Turks. Former Trump adviser Mike Flynn tarnished his image by registering as a foreign agent representing Turkey’s interests in 2016.

Mr. Erdogan’s narcissism increases the price of dictatorship by causing him to make unwarranted mistakes. A once cautious and calculating leader now pursues baubles that only generate enmities. This has damaged the economic growth that fueled his popularity. Mr. Erdogan has turned into a self-parody, with his 1,100-room palace and Ruritanian honor guard.

Where will it end? The president has two apparent objectives. First, Mr. Erdogan seeks to reverse Kemal Atatürk’s westernizing reforms to reinstitute the Ottoman Empire’s Islamic ways. Second, he wants to elevate himself to the grand, ancient Islamic position of caliph, an especially vivid prospect since Islamic State resurrected this long-moribund position in 2014.

Those two ambitions could meld together exactly 100 years after Atatürk abolished the caliphate, either on March 10, 2021 (by the Islamic calendar), or March 4, 2024 (by the Christian calendar). Either of these dates offers a perfect occasion for Mr. Erdogan to undo the handiwork of the secular Atatürk and declare himself caliph of all Muslims.

No one inside Turkey can effectively resist Mr. Erdogan’s enormous ambitions. This leaves him free to continue in his erratic ways, stirring trouble at home and abroad. That is, unless he one day trips, likely over an external crisis. Meantime, Turks and millions of others will pay an increasing price for his vainglorious rule.

*Mr. Pipes is president of the Middle East Forum.
Posted by Steve Lieblich at 7:58 am No comments:

From The Wall Street Journal, via The Australian, April 15, 2017 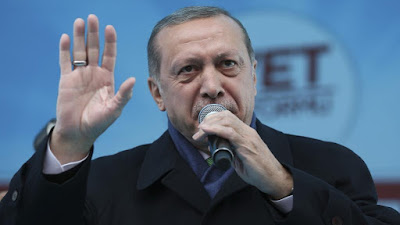 Turkish President Recep Tayyip Erdogan has spent the past few years laying the groundwork for authoritarian rule shaded by Islamism. With tomorrow’s referendum, he seeks to ratify his gains and sweep away the remnants of Turkey’s once-liberal democracy.

Those are the stakes in the referendum, in which voters will decide whether to transform the country’s parliamentary model into a strong executive system with Erdogan at the top.

Polls show a slight advantage for “Yes”, though opinion polling should be taken with a grain of salt amid the paranoia and repression that prevail in Turkey.

Under the proposed changes, Erdogan would be allowed to lead Turkey until 2029. His powers would expand to include declaring emergencies, issuing decrees, and appointing ministers and senior civil servants. The changes would permit Erdogan to check the judicial branch in some instances and simultaneously to head a political party while in office, something the constitution denies him today.

This presidential system would be the culmination of an authoritarian drive Erdogan launched a decade ago, when the ruling Justice and Development Party (AKP) purged a secular establishment that was the main bulwark against Islamism. The AKP has since tightened controls over the internet, brutally suppressed a youth uprising in 2013 and won Turkey the dubious honour of being the world’s foremost jailer of journalists.

Then came last year’s attempted coup, for which Erdogan blames his erstwhile ally Fethullah Gulen, a US-based imam who leads a rival Islamist network. Since the coup, the government has detained, fired or otherwise punished more than 140,000 Turks. In parallel to his domestic repression, Erdogan has intensified his anti-Western rhetoric.

Ankara has accused the Dutch and German governments of “Nazi” practices after they denied permission to pro-Erdogan rallies.

All of this has transpired under Turkey’s current parliamentary system, in which opposition parties can still vie for seats and check at least some of Erdogan’s excesses. If the AKP had more seats, Erdogan could have pushed through the constitutional change without having to bother with a referendum.

If he gets his wish for a stronger executive, the opposition would be further marginalised. This suggests Turkish democracy’s future could be grim no matter the outcome, and the choice facing voters is between shades of black.

If Erdogan loses, he will continue to strengthen the repressive apparatus and whip up nationalism with his gratuitous war on Turkey’s Kurdish minority. But if he wins, the possibility of democratically removing the AKP from power will be even narrower.

The danger for the Middle East, and for Turkey’s NATO allies, is the country could evolve into an Islamist state in the mould of Iran — albeit Sunni, not Shia. Erdogan beguiled many in his early years as an Islamist leader who claimed to respect democratic norms, but the sad irony is his drive for authoritarian power will lead many in the West to the unfortunate conclusion that Islam and democracy are incompatible.
Posted by Steve Lieblich at 7:19 am No comments: