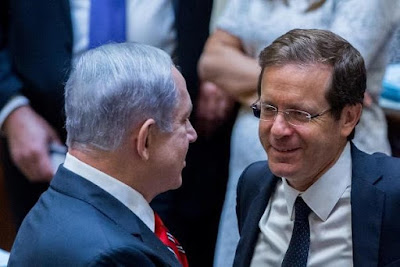 ...In January after the elections, while as leader of the opposition, [Zionist Union Chairman MK Isaac] Herzog  ...publicly endorsed the consensus policy toward the Palestinians adopted by Professor Shlomo Avineri, Labor Zionism’s foremost intellectual.

Although he emphasized that he remained committed to a separation from the Palestinians, Avineri maintained that the Oslo Accords were no longer relevant as the Palestinian leadership refused to accept Israel’s right to exist and considered Israel’s destruction a higher priority than achieving their own statehood. Avineri concluded that under such circumstances, efforts to implement a two-state solution were delusionary.

Despite bitter protests and condemnations from the radical ranks of Labor, Herzog publicly identified with this approach, explicitly stating that there is “no chance of peace in this era.” Furthermore, he declared that the Israel Defense Forces must remain in the West Bank and in the Jordan Valley. He told French President François Hollande that “hatred and incitement among the Palestinians” are currently too intense to contemplate implementing a two-state solution.

Thus, it was a shocking revelation when it was disclosed last week that, prior to last year’s election, at the height of Palestinian incitement and frenzied calls to “save Al-Aqsa,” Herzog was secretly negotiating terms for a final settlement with the corrupt and degenerate Palestinian Authority. Through former Deputy Defense Minister Ephraim Sneh, Herzog outlined the following surrealistic principles which were summarized in a secret letter of understanding with Palestinian Authority President Mahmoud Abbas and scheduled to be implemented following the elections.
·        Israel would withdraw to the 1949 armistice lines, i.e., from all of Judea and Samaria, with the exception of 4% territory swaps enabling Israel to retain portions of the settlement blocs. Those resident outside these areas would either be repatriated to Israel or obliged to accept Palestinian rule. Israel would retain a “symbolic” presence in the Jordan Valley in conjunction with Palestinian forces.
·        East Jerusalem would become the capital of a Palestinian state with a single municipality acting under the jurisdiction of both Israel and the Palestinian State.
·        The Temple Mount would be administered by an international force with an Israeli presence at the Western Wall.
·        The Palestinian refugee issue would be resolved on the basis of U.N. Resolution 194 with a “joint decision” to accept those wishing to return or accept financial compensation. The Arabs claim that currently over 5 million people - the original refugees and their descendants - are awaiting repatriation.
This is simply an extension of the Olmert formula – which was not approved by the cabinet or the Knesset and rejected by Abbas.

It was surely utterly naïve and politically counterproductive to extend such unilateral concessions before obtaining a single indication of reciprocity from the Palestinians. But the worst travesty was the unprecedented initiative of an opposition leader to furtively engage in foreign affairs initiatives that conflict with the policies determined by a democratically elected government. When this is applied toward hostile forces that promote and endorse terrorism, it could even be considered seditious.

What makes Herzog’s behavior even more reprehensible is that all opinion polls clearly demonstrated that a broad consensus of the nation was adamantly opposed to further unilateral territorial concessions. Most Israelis aspire for separation but recognize that unless the Palestinians demonstrate a willingness to accept the reality of a Jewish state and cease terror activities, there is no possibility of creating a Palestinian state.


To cap it, Herzog fought an election and failed to disclose to the electorate that these negotiations had taken place. Today, he admits that had he won, he had every intention of implementing these policies. Needless to say, had he disclosed his policy, he would have been decimated at the polls.

A year later, after this sleazy episode has been exposed, Herzog tries to justify his deceit by suggesting that the entire operation was designed to persuade Abbas to cease inciting against Jews. The late Prime Minister Yitzchak Rabin would turn in his grave if he could visualize how a youngster whom he personally nurtured politically and had become leader of his party, crossed every one of the red lines he had drawn in relation to territorial concessions to the Palestinians.
...The somewhat insipid response by the media to these revelations is a byproduct of our dysfunctional political system, having inured Israelis to political deceit and made them highly cynical.

Herzog has probably hammered the last nails into the coffin of the Labor party. Were an election to take place in the near future, it is almost assured that these misguided initiatives would result in the decimation of the Zionist Union...
After such duplicitous behavior – both ethically and politically unconscionable – Herzog must resign. The problem, however, is whether his potential replacements will be any better.

Posted by Steve Lieblich at 7:04 pm No comments: