Glenn Beck says Mel Gibson told him [in September 2016] that ‘Jewish people’ stole a pre-release copy of his movie, The Passion of the Christ, and used it to attack him. 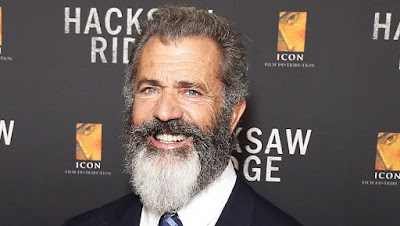 the beard hides nothing

...In his radio show ...and in a news story posted on GlennBeck.com, Beck claimed The Passion of the Christ director was still blaming Jews for his troubles during a 90-minute heart-to-heart...

According to Beck, Gibson claimed to him that “Jewish people” had stolen a copy of his Jesus movie more than a dozen years ago and used it to attack him and make his life hell before the film’s release.

Gibson’s 2004 film about the sufferings of Jesus at the crucifixion ... was bitterly criticized by Jewish and other religious scholars for ...anti-Semitic stereotypes.

...“I expected Hollywood to not like it, but I lost my friends,” Gibson said, according to Beck. “People wouldn’t even speak to me because I made this movie… All of a sudden I’m a pariah.” Recalling Gibson’s comments, Beck continued: “And then some Jewish people—I guess some rabbis or something, I didn’t get into it—somebody stole a copy of the movie before it was shown to anybody… And then they did a deal in The New York Times with all these rabbis trashing him as an anti-Semite.

...Strangely, the GlennBeck.com story about Beck’s chat with Gibson and a 6-minute video snippet of Beck’s narrative were removed from Beck’s website Friday evening, a few hours after they were initially posted. “Editor’s note: This post has been removed because it inadvertently revealed details of an off the record conversation. We regret the error,” said a notice on the page where the post had initially appeared—leading some to conclude that somebody from Team Gibson had complained about the potentially detrimental impact of Beck’s reminiscence about his chat with Gibson. The Daily Beast, however, was able to retrieve the original post using Google Cache.

...While Gibson’s alleged comments don’t seem calculated to smooth his way for a Hollywood comeback after a decade in the wilderness without a movie, at least two Jewish leaders are not surprised.

...“I guess Gibson tried to engage in some PR gimmicks,” Foxman said, “but in fact this interview [with Beck] only shows how deep [his anti-Semitism] is, how ingrained it is in him.”

New York Rabbi Robert Levine... told The Daily Beast: “He did a job on the Jews. The fact that he is not the slightest bit reflective or repentant more than 10 years later tells you all you need to know. His image took a hit, his career took a hit, and it was richly deserved. He could easily have gotten out in front of it and been apologetic. He knew what he was doing. It was perfectly obvious. There wasn’t a hint of subtlety.”


Indeed, Beck says that when he asked Gibson if he still would have made the same movie if he’d known about the outrage The Passion would provoke, “He said yes immediately. ‘I wouldn’t have changed anything with the movie.’ “It was the most amazing period of my life,” Beck quoted Gibson as saying.

This was two years before Gibson’s infamous July 2006 roadside encounter with a sheriff’s deputy in Malibu who pulled him over and subsequently arrested him for driving under the influence.


“Fucking Jews,” Gibson cursed at the law enforcement officer, according to the official police report unearthed by TMZ. “The Jews are responsible for all the wars in the world… Are you a Jew?”

Foxman, for one, disputed Gibson’s alleged account of a stolen movie, saying instead that a Jewish religious adviser to The Passion sent a screenplay to the Anti-Defamation League and that a team of both Jewish and Christian biblical scholars prepared a detailed critique. When the document was sent to Gibson, “he went berserk and threatened to sue us, so we returned the script,” Foxman said.

While Gibson toured the country in 2003 arranging private screenings for church groups, and even showed The Passion in Washington to an elite group of conservative opinion leaders, Foxman said the actor-director refused to show it to Jewish religious leaders.

Foxman eventually managed to see it by sneaking into a January 2004 screening at a church in Winter Park, Florida. “He would always say about us, ‘How can they criticize it if they didn’t even see it?,’ so I slipped in to see it,” Foxman recalled. “I know I wasn’t the only one, because about 10 of us in the congregation didn’t kneel [during prayers].”

Beck, meanwhile, said Gibson seemed mystified by all criticism. “He said, ‘I would understand it if it happened after [his drunken outburst in Malibu], but he said, no, this was before.” ...
Posted by Steve Lieblich at 6:59 pm No comments:

Public Security Minister Gilad Erdan and Interior Minister Aryeh Deri decided to deny the entry of Malawi citizen Isabel Phiri, who arrived Monday at Ben-Gurion Airport. The African country's national was then denied a tourist visa.
According to the Interior Ministry, Phiri has worked in the past with the World Council of Churches, an organization that has been supporting the BDS movement since 2002.
...“This is actually the first time the State of Israel refuses the entry of a tourist due to a clear background of anti-Israel activity and promoting economic, cultural and academic boycotts against Israel,” the Interior Ministry said in a statement.
“Allowing entry to activists such as Phiri would effectively reinforce the prohibited activities she and her friends are promoting,” Interior Minister Aryeh Deri said in a statement, “I will use all my authority at my disposal to prevent harm to Israel."
Posted by Steve Lieblich at 7:08 am No comments: