Posted by Steve Lieblich at 7:31 am No comments:

Is Gaza the "most densely-populated place on Earth"? 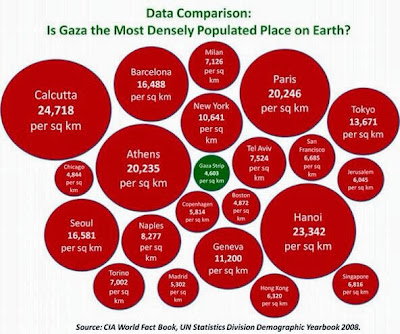 NO! Gaza is less-densely populated that Jerusalem , Tel Aviv, and a host of other places on Earth....

Posted by Steve Lieblich at 4:47 am No comments:


DYF 2.0-A Festival to Celebrate Israel
Declare Your Freedom is back and better than ever! This year, we're pulling out all the stops and holding a spring festival filled with music, speakers, food, and an all out celebration of Israeli culture!
Hey Yawl!  Chloé Valdary and Maor Shapira here coming to yawl from the heart of New Orleans! As some of you may know, Our team of dedicated students from Allies of Israel and with Tulane United For Israel, put together an amazing pro-Israel rally, the first of its kind in New Orleans's history. After much success, we're making DYF a yearly tradition in our community! And with other states like Florida and Minnesota potentially coming on board, DYF is going national!
As yawl know, Israel is a very important and dear country to our hearts.  The only Jewish state in the Middle East, Israel is a paragon of civil liberties, an amazing country filled with scientific and technological achievement, and a country that endeavors to spread good through out the world.
But more importantly, the only Jewish state is the realization of the Dream of Redemption for the Jewish people and the fulfillment of the Emancipation embedded within the Zionist Dream.Unfortunately, Israel is surrounded by enemies that threaten its existence. So we MUST support Israel in any way we can and Declare Your Freedom is a fun festive way to do exactly that!


These days, Israel is often mocked and ridiculed on school campuses. From Israel Apartheid Week to the ever popular BDS movement, the university has not historically been a pro-Israel environment. However we're working to change that!
We spend the entire year fighting slander, writing publications, and holding events, and this Spring will be the LARGEST event of the school year, put together by the

It  will illustrate our strength, solidarity, and perseverance as supporters of Israel.
Posted by Steve Lieblich at 8:17 pm No comments:

Israel responds to a sharp escalation of terrorist violence


...Isam Daalis, an adviser to Hamas Prime Minister Ismail Haniyeh, said that Hamas had contacted Egyptian authorities and asked them to help restore calm to the area after a sharp escalation in violence that began when an Israeli man working on the border fence with Gaza, 22-year-old Saleh Abu Latif, was shot dead by a sniper from within the Hamas-controlled coastal strip.

The IAF responded with a series of airstrikes on Hamas targets that were accompanied by fire from IDF ground forces gathered along the border.

According to Palestinian sources in the Strip, two people — a 3-year-old child named Hala Sabiha and her father — were killed during the Israeli strikes, and nine were injured. Hamas spokesman Mushir al-Mosri said the various Palestinian resistance movements were meeting to discuss their response to the attacks.

“If Gaza wants quiet then they should act accordingly and if not, they will bear the results...Gaza is not under any occupation. If they think the world will continue to support them while they create more victims then they are wrong. We will guarantee our security.”


In addition to the military action, Defense Minister Moshe Ya’alon ordered an indefinite closure of the Kerem Shalom cargo crossing on the southern Gaza border. Ya’alon said that the closure was due to security concerns.


“There is no direct connection between the terrorist attacks of the past two days and the shooting at the border of the Gaza Strip, which resulted in the death of an Israeli worker, but we treat all such incidents very seriously,” Ya’alon added.

Economy and Trade Minister Naftali Bennett blamed the Palestinian Authority for the increase in violence because, he said, it goads the Palestinian population to carry out terror.

“Israel is continuing with the peace process as though there is no terror while the Palestinians are continuing the terror as though there is no peace process...The claim that the Palestinian Authority is not connected to the terror attacks is blowing up in our faces every day.”
“When you educate children in terror from the age of kindergarten, when your television broadcasts depict Jews as monsters, when even Tel Aviv is not on your maps — then you are a terrorist...” ...


According to Israel Radio, the IAF attacks destroyed a Hamas military training facility west of the Khan Yunis refugee camp. The report added that Hamas targets in the Gaza neighborhood of Zaytoun and the Al-Bureij camp were damaged by the IAF as well.

Israeli sources said Hamas has pointedly neglected its duties under agreements reached following last year’s Operation Pillar of Defense, according to which Hamas was responsible for patrolling the Gazan side of the border and preventing attacks on Israel from the Strip.
Posted by Steve Lieblich at 7:47 pm No comments: