...An activist for Israel's opposition Labour party has filed a police complaint against left-wing human rights organization B'Tselem accusing them of treason after the organization's director criticized Israel's settlement activities in the West Bank before the United Nations last week.

Attorney and Labour activist Yuval Mor Musli submitted the complaint accusing B'Tselem of 'treason' as listed in Israel's criminal code. The complaint alleges that the organization has worked to harm the sovereignty of the State, give land away to a foreign entity, and has taken steps that could cause a war, the Times of Israel reported.

B'Tselem head Hagai El-Ad's testimony at a special meeting of the UN Security Council on Israeli settlements outraged many Israeli lawmakers, including Prime Minister Benjamin Netanyahu, who issued a scathing rebuke of the organization.

Left-wing Zionist Union lawmaker Itzik Shmuli also criticized the group's participation, telling Israel's Channel 2 News that to "rush to biased UN institutions is unhelpful, as it does not advance a solution here in the Middle East [and] it mostly advances the libel and demonization of Israel." 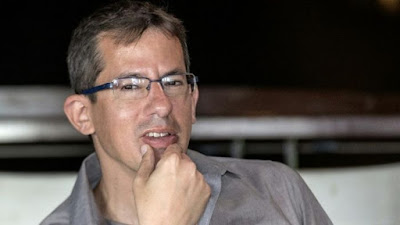 Netanyahu slammed El-Ad, who he said had joined the chorus of smears against Israel," and was trying to obtain through "international compulsion" what his organization has been unable to obtain through democratic elections in Israel....
Posted by Steve Lieblich at 5:57 pm No comments:


B'Tselem Executive Director Hagai El-Ad lied in his speech in an informal U.N. Security Council meeting  titled "The settlements as an obstacle to peace and a two-state solution." It was also the opening shot in a Palestinian gambit to promote an anti-Israel resolution on the settlements.

El-Ad's intentional misrepresentation was based on the claim that all settlements in Judea and Samaria are illegal because of what he calls "international agreement that the settlements are illegal."

This claim is mistaken in three respects:

The first and most important one is that according to international law, only the Jewish people has the right to sovereignty, including the right to build communities in the western part of the Land of Israel, which includes Judea and Samaria and the Gaza Strip.
This is because the State of Israel was established eight hours before the British Mandate ended, which gave it sovereignty over the entire territory that had been given as a mandate to the British by the League of Nations in a unanimous vote so that they could prepare the leaders of the Jewish people, through the Zionist movement, to take on the task of building a state. This was a precise implementation of Article 22 of the Covenant of the League of Nations, which is part of formal international law.

The second mistake is Meretz Chairwoman Zehava Galon's argument that the B'Tselem executive director had the same right to speak abroad as does the prime minister of Israel. Except that as long as the prime minister is acting within the framework of his legally defined authority to set policy that is backed by the representative of sovereignty -- namely the Knesset -- he must promote that policy in every possible forum, even if the B'Tselem leader doesn't like it. There is no symmetry here, because the policy that El-Ad was trying to promote through external intervention goes against the will of the sovereign entity, the people, as reflected in the Knesset. The executive director is trying to undermine the foundations of Israeli democracy, which is representative and parliamentary. Someone who fails over and over to achieve a majority for a particular worldview, no matter how right it might be in his eyes, must accept the decision of the majority. The spirit of democracy prohibits him from attempting to lead a foreign body to impose policies that go against what the majority wants.

The third mistake has to do with the chosen forum -- the United Nations. Article 80 of the U.N. Charter states that it and its institutions may not restrict the rights granted to the Jewish people by the mandate that was fulfilled when Israel was founded.
According to Article 80, the U.N. had a window of almost three years, from the time of the U.N. declaration to the time the state was founded, to revoke that right, but it chose not to do so. Therefore the Jewish people's sole right to sovereignty in Israel requires that all U.N. member nations refrain from dividing the western part of the land of Israel. Actions such as the recent U.N. Security Council session or the UNESCO decisions denying Jewish ties to the Temple Mount and the Western Wall violate the U.N. Charter and are completely invalid. (Take note, Israeli decision-makers as we approach the window of opportunity that U.S. President Barack Obama might exploit to pass decisions like these in the U.N. Security Council.) Preventing this is in accordance with the law, is just, and lines up with the rights the international community granted anew to the Jewish people through the Zionist movement.

The executive director's performance took advantage of a loophole in the law that the Knesset must close to protect democracy from being undermined and put on the defensive.
Posted by Steve Lieblich at 7:36 am No comments:

8
Shares
Facebook Twitter Google+ Email Print
A
It was business as usual at the United Nations on Friday as the Security Council devoted a session to criticizing Israel. Just to make sure that the argument was skewed the event was titled “Illegal Israeli Settlements: Obstacles to Peace and the Two-State Solution.” So rather than a debate about the legality of settlements or whether they (as opposed to Palestinian intransigence) are really the main obstacle to peace, what occurred was a Star Chamber proceeding with the one Jewish state in the dock. The usual suspects decried the presence of Jews in the West Bank, lamented the lack of a Palestinian state, and counseled that unless Israel changes its ways, it will face unspecified consequences.


But there was one thing that differentiated this day from all the Israel-bashing sessions that preceded it: the presence of two left-wing Jewish organizations to add their voices to the chorus of condemnation.

Representatives from Americans for Peace Now and B’Tselem, an organization that bills itself as a human-rights group while working to undermine the efforts of the Israeli Defense Forces, showed up at the UN to join the gang tackle of the Jewish state.


The testimony provided by the two groups was correctly contradicted by Israel’s UN representative, who pointed out the conflict is driven by Palestinian hate rather than Israeli home-building. But their decision to appear raises a serious question about the ethics involved in taking an active part in an effort designed to delegitimize Israel on the international stage. It’s fair to ask whether it is appropriate for any organization that identifies as either Jewish or Israeli to assist a world body that is riddled with anti-Semitism in conducting a kangaroo-court procedure in which the Jewish state is judged guilty beforehand.

The most egregious aspect of the presence of these two groups is the assertion made by Peace Now’s Lara Friedman that her participation at the meeting was due to what she said was the “harsh climate” in Israel for human-rights groups. Their work was, she said, too important to be “silenced.”
But no one is silencing Peace Now or B’Tselem in Israel.

It’s true that left-wing non-governmental organizations that seek to support the Palestinians against Israel are not particularly popular there these days. The 23 years of Palestinian terrorism and rejection of peace since the signing of the Oslo Accords have caused popular support for these groups to collapse. In particular, activities of outfits like B’Tselem and “Breaking the Silence,” which have taken steps to frustrate the IDF’s efforts in responding to the current “stabbing intifada,” have brought them into general disrepute.

In the past year, the backlash has led to a debate over a proposed law that would have required NGO’s that get a majority of their financial support from hostile foreign governments (as is the case with B’Tselem) to be more transparent about their funding. The law would also have required that NGO’s representatives who lobby the Knesset wear badges identifying themselves, much like lobbyists who work on Capitol Hill in Washington, D.C.

One can argue that the bill was unnecessary, but the notion that it was a threat to democracy, free speech, or the ability of these groups to go on functioning is risible.
Far from silenced, they continue to thrive with the help of European governments. They also receive more publicity for their efforts from both the generally liberal-leaning Israeli media (such as the left-wing Haaretz), as well as from an adoring international press corps. The claim that Peace Now and B’Tselem had to go to the UN to be heard is ridiculous.

The debate over the settlements and security policies continues in Israel with no restraints. Yet these left-wing groups remain unpopular because they seek to thwart Israeli democracy instead of defending it. The goal of their testimony at the UNSC was to encourage the world to enact measures that will isolate Israel and to force it to adopt policies that its government and the overwhelming majority of its people consider suicidal. That will remain the case so long as the Palestinians are committed to Israel’s destruction and the eviction of Jews from not just the West Bank but also Jerusalem. That point was emphasized by the vote they won at UNESCO yesterday, which denied the connection between Israel’s capital and the Jewish people.

Peace Now and B’Tselem have the right to say what they like wherever they choose to say it. But those who join with Israel’s outright foes at the UN, of all places, in an effort to overthrow the verdict of Israeli democracy or to deny Jewish rights and security should not expect anything but contempt from Israelis and those who care about the Jewish state’s survival.
Posted by Steve Lieblich at 10:01 am No comments: