Did Jews Attack the Temple Mount?

Last Monday, Jordan’s Ambassador to Israel, Dr. Marouf Bakhit called a hasty meeting with Israeli Foreign Ministry officials to declare his country’s outrage over the “provocative act” of a group of Jews who had the audacity to go up to the Temple Mount in commemoration of Jerusalem Day, the 38th anniversary of the reunification of Jerusalem. The official Jordanian news agency called the Jewish visit: “A provocative act that could stir up confrontation and evoke outrage of Muslims around the world.”

The very next day, the suave, urbane Ambassador Bakhit told a group of diplomats and journalists at a Jerusalem think tank that there is absolutely no proof that the Temple ever stood at the spot known to Moslems as al-Haram-ash Sharif, now occupied by the Dome of the Rock.

The entire episode may be viewed as part of the ongoing Arab strategy to delegitimize Jewish claims to holy sites and by extension to Jerusalem itself. None of this is new—Moslem clerics have regularly seized on perceived Israeli violations of the Temple Mount as pretexts to incite violent riots. But now the inflammatory statements are coming from a representative of the Jordanian government, who in the same speech to the diplomats and reporters claimed that his country is on its way to becoming “a moderate, tolerant, open society.”

Evidently that attitude does not extend to tolerating a dozen Jews visiting their holiest site. When several hundred Arabs started throwing rocks and chairs at the Jews and Israeli Border Police fired stun grenades to force the attackers to retreat, Jordan’s Minister of Religious Affairs Abdul-Salam al-Abadi said police actions and the visit of Jewish visitors “represent a flagrant and an unacceptable challenge. They are part of repeated attempts by Zionist settlers to break into and sabotage Al Aksa Mosque to implement their vicious and criminal plans.”

The official statement went on to urge all Arab countries and Islamic organizations to “interfere” to put an end to “attacks” against Al Aksa. Quizzed about whether he personally considers the presence of Jews on the Temple Mount to constitute “an attack” on the mosque, Ambassador Bakhit refuses to answer. All he asserts is that “4 or 5 extremists managed to sneak in with a group of tourists…”

Bakhit issues no condemnation of the Arab rock throwers who injured two Jews during the incident. He does mention, “I’m not good at religion, not mine or others..” But evidently good enough to promote his government’s view that Jewish visits “endanger the safety of the mosque and Moslem worshippers.”

A few hours before his Jerusalem appearance, terrorists in northern Gaza fired at least three Kassam rockets at the southern Israeli town of Sderot, hitting a house, but causing no injuries.

Hamas claimed responsibility for the attack, which they said came in retaliation for the Jewish visit to the Jerusalem holy site. (Sderot, a development town two hours south of Jerusalem, get it?) Bakhit’s job was done. The Jordanians predict “confrontation and outrage” and Hamas is happy to oblige.
Posted by Gedalia at 6:31 pm 2 comments:

The report claims in its summary that:

The assumption that Arabs in the West Bank and Gaza pose a demographic threat to Israel has to be radically revised. The 2004 Palestinian-Arab population was closer to 2.4 million than to the 3.8 million reported by Palestinian Authority (PA) officials. These findings should have a significant impact on politicians, policy makers and international aid agencies.....

.......Since 1967, Jews have maintained their 60% majority in Israel, West Bank and Gaza and since 1990, the Jewish population has grown by 2.5% a year, only a slight fraction below the growth rate in the West Bank.

For the full report including summary pie-charts go to http://www.pademographics.com/
Posted by Steve Lieblich at 8:28 am No comments: 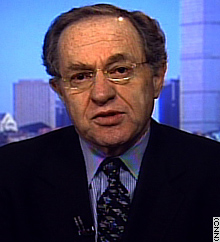 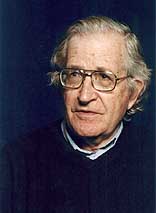 (Thanks to Ben for pointing out a previous error)

On 10th May we posted an article entitled "The Hazards of Making the case for Israel". The attached photo was erroneosly captioned, confusing Chomsky for Dershowitz. (The caption has now been retrospectively corrected.) For the removal of any doubt we post the above photos (thanks to Google Images)...
Posted by Steve Lieblich at 2:25 pm No comments:

Roots of Anti-Semitism in the Arab World

The latest of the Updates from AIJAC (06/05 #02) includes an article called "National Socialism and Anti-Semitism in the Arab World", by Matthias Küntzel. It's a detailed and scholarly study that demonstrates why the anti-Semitism we see today is so reminiscent of the scourge our parents and grandparents faced - not so long ago - and which we face today. We post just a very brief extract ...

Anti-Semitism based on the notion of a Jewish world conspiracy is not rooted in Islamic tradition but, rather, in European ideological models. The decisive transfer of this ideology to the Muslim world took place between 1937 and 1945 under the impact of Nazi propaganda. Important to this process were the Arabic-language service broadcast by the German shortwave transmitter in Zeesen between 1939 and 1945, and the role of Haj Amin el-Husseini, the Mufti of Jerusalem, who was the first to translate European anti-Semitism into an Islamic context. Although Islamism is an independent, anti-Semitic, antimodern mass movement, its main early promoters - the Muslim Brotherhood in Egypt and the Mufti and the Qassamites in Palestine - were supported financially and ideologically by agencies of the German National Socialist government.

...(in 2003)... the Friedrich-Ebert-Stiftung (FES), a think tank with close ties to the German Social Democratic Party (SPD), and the Hizbollah's "research department" organized a joint conference in Beirut titled "The Islamic World and Europe: From Dialogue to Agreement." Just as remarkable as the cooperation between an institution of a German party of government and an Islamist terror organization was the conference agenda, which included an item on "occupation and resistance" but nothing on Al-Manar's anti-Semitic agitation.

.....The Al-Manar satellite channel ....has the greatest reach in the Arab-Islamic world after al-Jazeera. Ten million people a day tune in to the round-the-clock broadcasts from Beirut. Al-Manar ("the Beacon") is the first and to date only satellite channel that, not even pretending to objectivity, sees itself as the global voice of Islamism. Its popularity is due to its countless video clips, which use inspiring graphics and uplifting music to promote suicide bombing. Al-Manar not only pushes for terrorist acts against Israel but inspires, justifies, and acclaims them.

...In Europe this channel, whose costs are covered by, among other things, advertising the German chocolate Milka, the Finnish Smeds cheese, the Austrian Red Bull drink, and the French Gauloises cigarettes, is broadcast by the Eutelsat satellite firm via its Hotbird 4 satellite. The French newspaper Libération estimates that 2.6 million households in France alone can receive the channel, which since 9/11 has also gained growing popularity in Germany's Arab neighborhoods.

....From Zeesen (the WW2 radi station) to Beirut (the Al manar satellite station) : why did the anti-Semitic holy warriors in 2002 decide to approach Germany in particular with their conference proposal? The answer is no secret. Udo Steinbach, head of the Deutsche Orient-Institut in Hamburg, quite openly enthused about the "lingering effects of the sympathy traditionally evinced for Germany in the whole region."

... The ideological basis for this sympathy was decisively strengthened by Radio Zeesen and the Mufti's pro-German orientation. Is German foreign policy today picking up the threads of this "sympathy"? Foreign Office officials evade giving a clear answer to this question. Instead, the virulent pro-Nazi sentiment is purposefully ignored and the continuation of a Nazi-like anti-Semitism has met with inexcusable nonchalance.

The Matthias Küntzel Web site is a treasure trove of material for defenders of truth and justice. We have added it to our permanent links.
Posted by Steve Lieblich at 10:32 am No comments:

From The Guardian Unlimited: Special reports
by Jon Henley in Paris Saturday June 4, 2005
(thanks Paul for alerting us to this one)
A French appeal court has found the editor-in-chief of Le Monde and the authors of an opinion piece in the paper guilty of 'racial defamation' against Israel and the Jewish people.
In a ruling greeted with applause by Jewish groups and some alarm by media lawyers, the court ordered Jean-Marie Colombani and the three writers to pay a symbolic one euro in damages to the France-Israel Association and to Lawyers Without Borders....
article continues....
Posted by Steve Lieblich at 10:00 am No comments:

The Israeli government has been exerting strong diplomatic pressure to prevent the Palestinian Authority from executing some 50 Palestinians who were convicted of collaborating with Israel and sentenced by a military court to execution.

....Israel has also clarified to the PA that the continuation of the process of freeing Palestinian prisoners held in Israel is contingent on the decision to refrain from carrying out the executions. Some 400 Palestinian prisoners were released last week only after the PA assured Israel that there was no intention of putting the sentences into effect.

...Israel Justice Minister Tzipi Livni and the prime minister's adviser, Dov Weissglas...said that Israel would not tolerate the executions, whether the people involved had actually collaborated or not.

....The Israeli position was reiterated at a meeting of the joint committee on prisoner affairs that took place on May 8. The PA representatives then informed their Israeli counterparts that Abu Mazen had no intention of carrying out the executions.
Posted by Steve Lieblich at 11:10 pm No comments:

Blowing Up A Synagogue - By Naomi Ragen

On Friday, the morning news reported that two terrorists from Islamic Jihad working out of Beit Hanina had planned a double suicide attack against the Jerusalem suburb of Ramot. They had planned to walk into a synagogue on Shabbat when it was full of worshippers and/or take a bus, or walk into the local shopping center and blow themselves up.

I felt my hands begin to shake. Ramot is where I live, and Beit Hanina is a fifteen minute walk across the hills.

What makes this especially horrible, is that it is happening all over the country daily since Mr. Abbas took over. There have been hundreds of attacks against Israeli civilians. And those are the ones that are successful. You won't even hear about those prevented, like the one in my neighborhood, if not for the alertness of our soldiers at the much-maligned checkpoints.

The fact is, things are quiet because our fence is working and our soldiers are successful. But most of the world (Jewish community included) doesn't understand that. They think there has been a slow down in terror because the Palestinian Authority is doing something. And they think that this deserves to be rewarded, otherwise we will go back to the days when buses were blowing up everyday. We are already "back" in those days, except we have been fortunate enough to catch these people. But all our success has done is to shore up the reputation of a disreputable man and his despicable regime. Below, two web sites where you can read incident by incident the terror attacks that have been launched against our people in the last few months alone. You won't find any mention of attacks that didn't take place, like the one that nearly blew up a synagogue in my little Jerusalem suburb.

http://www.jr.co.il/terror/israel/
Posted by Gedalia at 6:50 pm No comments: