Don't Ignore the Cultural Boycott of Israel
by Lana Melman*, May 2017

Nearly 50 artists, including Roger Waters, Thurston Moore, Julie Christie and Mike Leigh, recently signed an open letter to the English rock band Radiohead, urging them to cancel their upcoming concert in Israel in support of the cultural boycott against the Jewish state.

In addition to the anti-Israel "regulars," some new artists joined the signatories this time, including the hip-hop group Young Fathers.

The open letter was widely reported on in both music and mainstream publications, including Pitchfork, the Washington Times, Vulture and Yahoo News.

These reports, with rare exception, quote heavily from the letter’s false accusations about Israeli apartheid and human rights violations, without any semblance of a counter-argument to these charges.

In reality, Israel is an open, liberal democracy that guarantees equal rights to all its citizens. Hundreds of artists who visit or perform there every year speak glowingly about the Jewish state, despite the harassment they receive by the likes of Roger Waters and mostly ill-intended grassroots groups.
In its article, Pitchfork, a popular music magazine that bills itself “as the most trusted name in music,” created the illusion of a wave of support for a cultural boycott of Israel by musicians and artists.

The Pitchfork article also failed to balance the negative comments by the letter's signatories with even a smattering of positive descriptions, such as one by Madonna, calling Israel “the spiritual center of the world,” or by Jay Leno, who describes Israel as “this one little paradise in the Middle East where freedom reigns.” They also failed to mention Paul McCartney, who kept his concert date in Israel despite threats against him.

Just two days after the circulation of the most recent open letter against Israel, the chief pop–music critic at the New York Times interviewed Roger Waters, as part of its TimesTalks series of conversations with 21st-century “talents and thinkers.”

In the question and answer session, Waters admitted that the open letter fell on deaf ears, and that Radiohead remained committed to performing in Israel in July.

Those same publications that breathlessly reported about the boycott letter were inexcusably quiet about that announcement.

When news outlets publicize calls for the cultural boycott of Israel and fail to provide balance, they are not sharing a news story; instead, they are helping to spread misinformation, lies and propaganda. 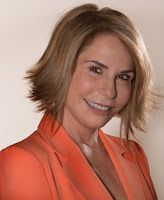 *Lana Melman is the CEO of Liberate Art Inc., a leading expert and commentator on the cultural boycott effort against Israel, a Hollywood liaison, and a professional speaker and writer.

Posted by Steve Lieblich at 3:56 pm No comments: