Left’s hatred of Israel is racism in disguise

How do you know if someone’s an antisemite? ... 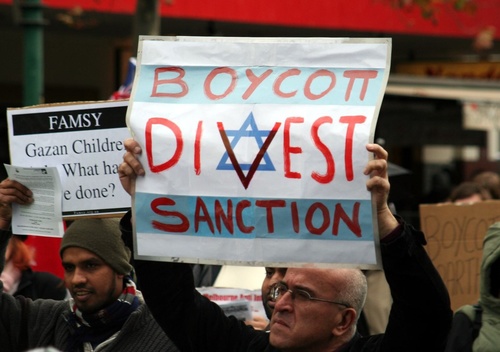 In medieval times, when individuals made sense of their world through the prism of faith, antisemitism was a religious prejudice. In the 19th and early 20th centuries — the age of Darwinism — antisemitism clothed itself in the white coat of the scientist. Biological metaphors were deployed to modernise hate. The Jews were carriers of “racial contamination” who had to be eliminated as a pathological threat to humanity’s future.

That belief led to history’s greatest crime. The extermination of six million powered by hatred of one thing — Jewish identity. It should have been the case that antisemitism died in the furnaces of the Holocaust. But the hatred survived. And, like a virus, mutated.

Antisemitism has moved from hatred of Jews on religious or racial grounds to hostility towards the proudest expression of Jewish identity we now have — the Jewish state.

No other democracy is on the receiving end of a campaign calling for its people to be shunned and their labour to be blacklisted. The Boycott, Disinvestment and Sanctions movement is a growing force on our streets and campuses. Its campaigners argue that we should ignore ideas from Jewish thinkers if those thinkers come from Israel and treat Jewish commerce as a criminal enterprise if that business is carried on in Israel.

This is antisemitism, impure and simple. It is the latest recrudescence of the age-old demand that the Jew can only live on terms set by others. Once Jews had to live in the ghetto, now they cannot live in their historic home.

It is to Britain’s eternal credit that we rejected centuries of prejudice one hundred years ago and pledged to extend to the Jewish people the rights enjoyed by Germans and Italians, Japanese and Mexicans — the right to a land they could call their own. The Balfour Declaration in 1917 was followed in 1948 with the creation of the state of Israel. Since then, that state’s success has been near-miraculous.

Surrounded by enemies who sought to strangle it at birth, continually threatened by war and constantly under terrorist attack, a nation scarcely the size of Wales with no natural resources, half of whose territory is desert, has become a flourishing democracy, a centre of scientific innovation, one of the world’s major providers of international humanitarian relief and the only state from Casablanca to Kabul with a free press, free judiciary, a flourishing free enterprise economy and freedom for people of every sexual orientation to live and love as they wish.

For those on the left addicted to guilt-tripping and grievance-mongering, who believe that poverty is a consequence of western exploitation and that bourgeois ethics lead to oppression, the existence of a political entity that is a runaway success precisely because it is a bourgeois-minded, capitalist-fuelled, western-oriented nation state is just too much to bear. Their ideological prejudices have collided with a stubborn, undeniable, fact.

So what do they do? Keep the prejudices, of course, and try to get rid of the fact. Try to undermine, delegitimise and reduce support for Israel. Make it the only country in the world whose right to exist is called continually into question. Make the belief in that state’s survival, Zionism, a dirty word. Denounce, as the NUS president has, a British university for being a “Zionist outpost”. And instead call organisations pledged to eliminate Israel such as Hezbollah and Hamas “friends”, as Jeremy Corbyn has.

Antizionism is not a brave anti-colonial and anti-racist stance, it is simply antisemitism minding its manners so it can sit in a seminar room. And as such it deserves to be called out, confronted and opposed.

Because the fate of the Jewish people, and the survival of the Jewish state, are critical tests for all of us. The darkest forces of our time — Islamic State, the Iranian leaders masterminding mass murder in Aleppo — are united by one thing above all: their hatred of the Jewish people and their home. Faced with such implacable hatred, and knowing where it has always led, we should not allow antisemitism any space to advance, or incubate.

Instead we should show we’re not going to be intimidated by those who want to treat Israel as a second-class state, we’re not going to indulge the antisemitic impulse to apply the double standard. Israel is the only state where we don’t locate our embassy in the nation’s capital and the only ally the Foreign Office has refused to let the Queen visit. So let’s celebrate the centenary of the Balfour Declaration by moving our embassy to Jerusalem next year and inviting Her Majesty to open it. What are we afraid of? Earning the enmity of those who hate Israel? To my mind, there could be no greater compliment.
Posted by Steve Lieblich at 10:40 am No comments:

Prayer at the Western Wall Yehuda Shlezinger, in Israel Hayom, 12 December 2016, reports that, after many years of arguments and physical clashes about non-orthodox prayer at the Kotel, and current dabate about the construction of a separate egalitarian prayer plaza...


MKs from Shas and United Torah Judaism, along with lawmakers from Habayit Hayehudi and Likud, presented the Knesset with a bill that would codify the status of the Western Wall in terms of Jewish law.

This issue reminds me of a debate we had in our local Habonim va'ad, about 45 years ago. The issue on the table was: should Habonim camps and events be kosher catered?

There were those who argued that Habonim is not a religious movement and most members were not shomrei Shabbat, so kosher catering was not necessary... and why should the few observant members dictate that all the others should eat kosher?

The alternative argument was: we want to be inclusive; we want every Jew to be able to attend Habo; we want them to feel welcome. So obviously we must provide kosher catering. So then we considered providing kosher catering just for those members who requested it, and not for the rest. However this would be divisive. If we entertained a group of people in our home, would we serve kosher food to some guests and something different to others? Would that be hospitable?

In conclusion we decided that all Habo camps and events would be kosher. We wanted no-one to stay away because they couldn't eat together with their chaverim. It was no trouble to those who were otherwise not so observant, to eat kosher once in a while.

Similarly, it's no trouble to those who pray in a different way, to observe othodox traditions when they visit an orthodox shul. When non-Jewish dignitaries visit the Perth Hebrew Congregation, the men wear kippot, the women sit with the women, and they participate respectfully. They may quietly pray in they own way if inspired to do so, but they don't disrupt our service in order to do so.

When I visit a church, Hindu Temple or a progressive liberal Jewish synagogue, I also try to behave respectfully in accordance with the minhag of that community, by removing my shoes, standing when the congregation stands etc etc, even though I may not answer amen...

The Kotel is an orthodox shul. It's as close that we can get to the Temple itself, where the prayer services were always conducted in accordance with ancient, orthodox Jewish tradition. When I take non-Jewish visitors there, the men wear the paper kippot offered, the women go the women's side of the mechitza, and they act respectfully. I've seen many of them become quite emotional and overwhelmed by the spirit of the place and quietly pray in they own way , but they don't disrupt the prayers of others in order to do so.

So what is the need for Women of the Wall and the progressive Jewish movements to invade and disrupt orthodox prayer at the Kotel? Why can they not observe basic courtesy and respect for the minhagim of others? Would they also invade orthodox shuls or Hindu Temples? If they're so overcome with spritual fervour at the Kotel, why don't they go up to Har Habayit and disrupt the Mosque services up there?

And if they really MUST set themselves apart, rather than respect the minhag of the place (like sitting at the one table but eating different food) then, in February, the Israeli Cabinet set aside a place for non-orthodox prayer. The plan was to build a permanent mixed-gender prayer area where a temporary non-orthodox prayer platform is today, and to create a new entrance to the Western Wall area so both Orthodox and non-Orthodox prayer areas will be given equal prominence. Why aren't Women of the Wall etc prepared to accept that (albeit divisive, but) egalitarian plan? Why must they dominate? WHY DO THEY WANT TO INVADE THEIR FELLOW JEWS, BUT ARE NOT PREPARED TO CONFRONT THE ENEMIES OF ISRAEL?

I sympathise with those in the Knesset who say enough is enough. I don't like the fact that it's come to this: that Jews quarrel amongst themselves, while a sea of turmoil surrounds the nation, which faces existential threats from hordes of sworn enemies. But if the progressives refuse compromise and insist on dominance, then yes, the Knesset should  go ahead and


"..create vital order at the most holy site to the Jewish people and regulate its status under Jewish law. It is unacceptable that this place, which the holy spirit never leaves, which generations of Jews longed for, [has] become a place of shameful clashes and offense to the millions of Jews who visit it...."

Preferable, please, let us unite and respect eachother, without trying to impose ourselves on others.
Posted by Steve Lieblich at 8:43 am No comments: