“From the river to the sea, Israel will be free.” 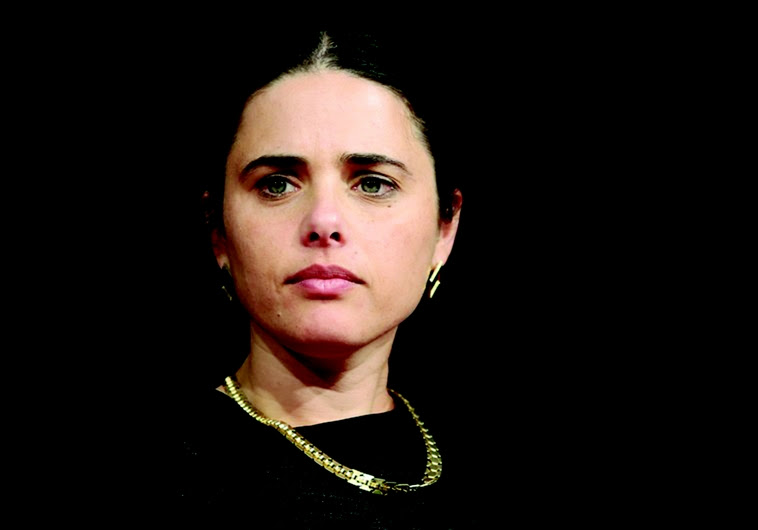 I met Israel’s newly elected Justice Minister Ayelet Shaked at the offices of the Justice Ministry, a rather nondescript building located in east Jerusalem. I wanted to interview her when I first read about her. She’s a secular Jew and on the Right of the political spectrum. It was written as if this were some anomaly – which made me one, too.

Her views on care for the weakest among us fit in with social justice, too often associated only with the Left. She proposed a bill to assist the 30,000-40,000 people who have so much debt that they will never recover. The bill proposes a onetime wiping of their debt, reminiscent of Jewish law regarding the Shmita year. (For those not familiar with this Jewish term it refers to the seventh year in a seven-year cycle during which land in Israel must lie fallow and debts are canceled). The plan is unique to the Jewish state: the marrying of Jewish law with democracy, something one would not see in any other Western country.

But poverty in Israel will only diminish when Israel no longer has to spend so much on defense of its people and borders. And it isn’t just money. I shared with the minister the sentiment of the grandmothers I had met on this trip – their despondency and exhaustion from all the wars, having watched their husbands, then sons and now their grandsons going off to war.


“It is not despair. Israel needs to accept that there will be no peace in the near future. The reality is that the Middle East is on fire. It has collapsed. Radical Islam surrounds Israel. But Israel remains a lighthouse of democracy, humanity and the economy in the darkness. In the meantime, Israel must manage the conflict because that is the only option available for now.
In the foreseeable future the status quo is going to remain.”
And then she added, “We must fight without fear and without mercy against our enemies.”

When it comes to defending Israel’s right to exist, Shaked reminds me of a mother bear separated from her cubs. Never get between a mother bear and her babies. It’s not a pretty sight.

Shaked is also cognizant of the problems experienced by Israeli Arabs. I’d spoken to Khaled Abu Toameh, a prominent, well-respected Arab journalist who shared his apprehension about Israeli Arabs who consider themselves loyal citizens of Israel, acknowledge living a better life than Arabs outside Israel, but still feel they’re not being treated equally. He fears if their concerns aren’t met they might pose a threat to the country.

She responded, “Israel is promoting Arab rights, freedoms and education. Naftali Bennett, [the] education minister, is giving more money to Arab local authorities to improve their opportunities because Israel wants all her citizens to do well. They must be able to be part of the working force and the economy. Arab Muslims who do well in Israel hopefully will overcome the call of the extremist groups because they will realize that life is good in Israel for their families.”

She’s also been in touch and works closely with Christian Arab Zionists who are threatened with violence because of their willingness to be part of Israeli society by joining the IDF.

Shaked represents a new generation of Israelis who haven’t experienced one day of peace, one day without all-out war, violent acts of terror on civilians or random rocket fire. While I was in Israel, rockets were fired in Ashkelon and a number of terrorist attacks were thwarted; others were not.

Rarely does a week go by without a report of at least one terrorist attack, one rocket launched. If that’s not enough, this generation of leaders must take on the BDS (Boycott, Divestment and Sanctions) movement and Jew-hating events like Israel Apartheid Week, which began in Canada in 2005.

Shaked, who developed “My Israel” to share the stories of Israel before entering politics in 2006, acknowledged that, “In general, Israel did not put enough energy and money into hasbara [public diplomacy]. Israeli governments did not see it as strategic.”

A new unit in the strategic affairs department to counter the BDS movement will be led by Gilad Erdan, information minister and public security minister, with assistance from Naftali Bennett and Shaked. The ministry is preparing to file lawsuits against activists who call for blacklisting the Jewish state. According to Tazpit News Agency, Erdan will have a budget of approximately $26 million.

She made it quite clear that she will not tolerate “haters.” And she has plenty. She must be doing something right to elicit such hate.

Saeb Erekat has called her “a new form of racist,” an extremist on the warpath.

Turkish President Recep Tayyip Erdogan once compared her to Adolf Hitler. Photo- shopped images of Shaked as a Nazi have been posted on social media. She’s been attacked for her looks. (Where are the feminists?) She’s tall and slender and yes, beautiful.

She’s also bright and brawny. Borrowing a metaphor from American football – she is a triple threat.

Canadian Yakov Rabkin, an historian at the Université de Montreal, said her appointment “is a reflection of the public mood in Israel, whether we like it or we don’t. She is very anti-Palestinian. She has violent discourse and all that, but in that, she reflects the public mood.”

And I hope that more countries will come to defend Israel as have my country, Canada, and my prime minister, Stephen Harper.

She told me “Israel sees Canada as one of the best allies of Israel, accepting the country without preconditions. That declaration of friendship gives power and strength to Israel. Prime Minister Harper is one of the only non-hypocritical leaders who stood up for our common values.”

There are those who disparage my prime minister’s words because Canada has a small military, and “talk is cheap.” But we are the only country with the moral courage to stand up and unconditionally defend a sister democracy. We will never know how history would have been recorded if Western leaders had spoken up against the Nazis in the early 1930s.

The minister said history will judge her generation by the steps they take now. Will they be able to let go of dreams which are no longer relevant and at the same time create a new appreciation for Israel in the world?

I thought I heard a rumbling in the land: “From the river to the sea, Israel will be free.”
Posted by Steve Lieblich at 7:29 am