From "Candidly Speaking from Jerusalem", 30 June 2015, by Isi Leibler: 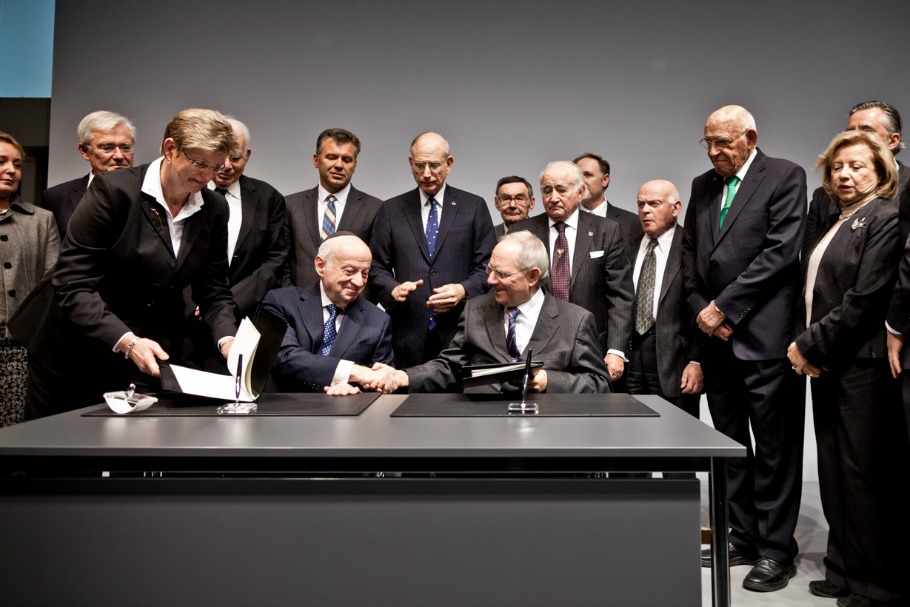 It is now almost a decade since I have been urging for drastic reform and change of leadership in the wake of successive scandals relating to the mismanagement of the Claims Conference, the organization entrusted to pursue justice on behalf of the Jewish people for Holocaust victims and survivors.

The lack of oversight enabling senior Claims Conference employees to steal $57 million of restitution funds, the cover-ups, and refusal to accept accountability or enable an independent investigation to review the management were bad enough. There is now informed chatter that the theft of restitution funds significantly exceeds $57 million. It is now believed to have reached the $100 million mark, but the management refuses to disclose the figures to the public or to directors.

On top of this, a new fraud relating to misappropriated funds in Ukraine, also incurred due to lack of adequate oversight, is being investigated. As of now, this also has not been revealed to the public or directors.

If that were not enough, this week, on the eve of the annual board meeting, a dramatic communication – effectively a smoking gun – has been dispatched to Claims Conference directors by its ombudsman, Shmuel Hollander. An extraordinary document, it not only confirms what critics like myself have been saying, but even magnifies the extent of the breaches in governance, lack of transparency, cover-ups, and denial of accountability by the leadership. It confirms that the majority of directors are either unaware of or are ignoring their fiduciary responsibilities and have enabled Conference President Julius Berman and his Executive Vice President, Greg Schneider, to continue operating the organization as though it were their personal fiefdom, failing to prioritize the needs of ailing Holocaust survivors.

Hollander, a highly respected and consummate civil servant, having served as the Israeli government’s Civil Service Commissioner and Secretary of the Government under six prime ministers, not only reaffirms these charges but brings other shocking behavior to light.
He informed the Board of Directors that Berman told him explicitly that his contract as ombudsman would not be renewed because of his critique of the Claims Conference in a July 2013 report, prepared for a select committee, which detailed the mismanagement and lack of adequate financial oversight resulting in the $57 million fraud.

Hollander’s report was commissioned after it emerged that Berman and Schneider had been forewarned in an anonymous letter about the fraud more than 10 years prior to its discovery and that Berman, in his capacity as general counsel, had been charged to investigate the matter, but failed to adequately follow up.

That report stated that the Claims Conference:
• Failed in “tailoring its organizational structure to meet the growing range of activities and needs”


His report concluded that the Claims Conference management had failed to address the fraud even when made aware of it. An “enormous hole in the control mechanisms sent out an invitation to the thief” and “even with the writing on the wall, and the organization exposed to warning signs, the matter was not attended to.”

Most worrying, however, was that Hollander found that management failures were not restricted to the multi-million dollar fraud, but should be “reviewed and addressed against a backdrop of systematic failings and problematic organizational behavior,” adding ominously, “only the tip of the iceberg was revealed to us”!....

...These new revelations can no longer leave any room for doubt. They document how Berman and Schneider actively sought to undermine and prevent even internal reviews of the organization and took vindictive punitive steps against Hollander for making adverse findings against them personally.

The time for action to bring an end to this obscene scandal is now or during the forthcoming July annual meeting of the Board of Directors. So long as Berman and Schneider – both of whom have engaged in cover-ups and breached governance on an ongoing basis – remain in office, the organization shall lack any credibility or legitimacy. The ultimate responsibility rests with the board, which has disregarded its fiduciary responsibilities and allowed this scandalous state of affairs to carry on.

If the directors fail to act, they will be exposing not only themselves but the organizations they represent to external scrutiny. Sad as it may be, under such circumstances, perhaps only outside intervention by an external law enforcement body, such as the New York State Attorney General, may save the Claims Conference.

Posted by Steve Lieblich at 7:09 am