Address of Colonel Richard Kemp to the United Nations Human Rights Council  Debate on report of the UNHRC Commission of Inquiry into the 2014 Gaza Conflict Geneva, 29 June 2015 (with the editor's emphasis added): 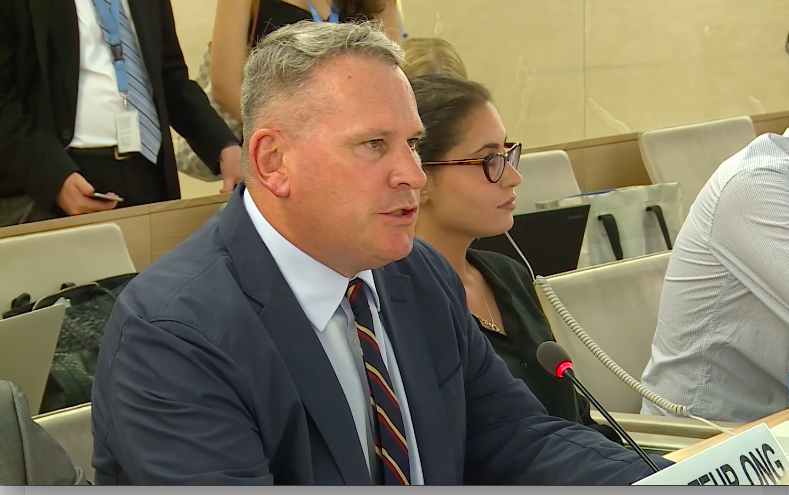 Mr. President, I fought in combat zones around the world during 30 years’ service in the British Army. I was present as an observer throughout the conflict in Gaza.

Mr.  President, during the 2014 Gaza conflict, Hamas, to its eternal shame, did more to deliberately and systematically inflict death, suffering and destruction on its own civilian population, including its children, than any other terrorist group in history.

Hamas deliberately positioned its fighters and weapons in civilian areas, knowing that Israel would have no choice but to attack these targets, which were a clear and present threat to the lives of Israel’s own civilian population.

While the IDF made efforts, unprecedented in any other army, and exceeding the requirements of the laws of war, to save Palestinian civilian lives, including warning them to leave target zones, Hamas forced them to remain in those areas.

Unable to defeat Israel by military means, Hamas sought to cause large numbers of casualties among their own people in order to bring international condemnation against Israel, especially from the United Nations.

This was the cornerstone of Hamas’s strategy.

It was Hamas’s strategy, not illegal Israeli action, as this report shamefully alleges, without a shred of evidence, that was the reason why over 1,000 civilians died in Gaza.

By denying this truth, and by refusing to admit the manifest reality that the conflict in Gaza was caused by Hamas’s war of aggression against Israel, this report faithfully reiterates Hamas’s own false narrative.

This [UN Human Rights] council has for too long allowed itself to become a tool of Hamas’s murderous strategy. By unjustly condemning Israel, by refusing to condemn Hamas’s repeated and unprovoked aggression, this council has consistently validated and encouraged Hamas’s tactics.

I urge all delegates to this council to reject this report. Failure to do so amounts to support of Hamas terrorism and will result in further rounds of violence in Gaza and Israel. The price for that will be paid in the blood of the people of Gaza and Israel.

Thank you, Mr. President.
Posted by Steve Lieblich at 5:45 pm