The Pew Research Center, a subsidiary of The Pew Charitable Trusts, has the means to sample opinion with unique frequency and on a major scale. It has used its funds to track Muslim attitudes toward Islamism in general, toward specific terrorist groups in particular, and also suicide bombing over the past decade .

The most recent study, "Concerns about Islamic Extremism on the Rise in Middle East," released on July 1, conducted among 14,244 respondents in 14 countries between April 10 to May 25, 2014, holds much interest. Pew summarized the overall results:

As well-publicized bouts of violence, from civil war to suicide bombings, plague the Middle East, Africa and South Asia, concern about Islamic extremism is high among countries with substantial Muslim populations. … And in the Middle East, concern is growing. Lebanese, Tunisians, Egyptians, Jordanians and Turks are all more worried about the extremist threat than they were a year ago. Meanwhile, publics hold very negative opinions of well-known extremist groups, such as al Qaeda, Hamas and Hezbollah.

In my reading, the survey makes two major points and also offers some lesser tidbits of interest: :
(1) The better Muslims know Islamism, the more they reject it. This theme pervades the poll numbers when compared over time. As Islamism has surged over the past decade, Muslim support for it has decreased nearly across the board, with the last year showing a particularly dramatic reduction.

Graph 1, "Increasing Concerns about Extremism in the Middle East" shows an average increase of 9.4 percent in anti-Islamist feeling in a single year between 2013 and 2014: 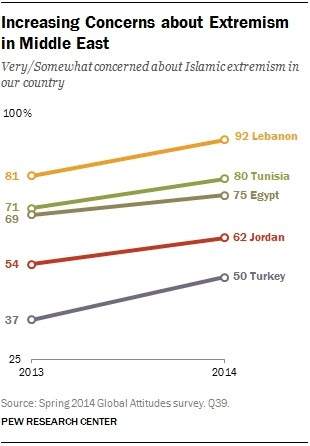 Graph 2, excluding Lebanon, the outlier, "Unfavorable Views of Hezbollah on the Rise in the Middle East; Steady in Lebanon" finds an average 34 percent increase in disapproval of Hezbollah in the four countries surveyed since 2007. 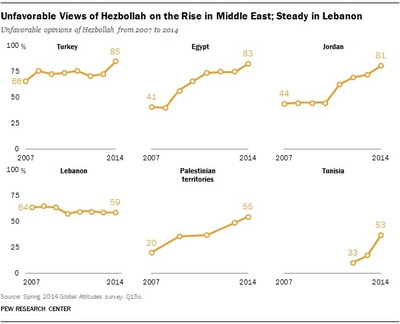 Graph 3, "Palestinian Opinion of Hamas Declines" records a near-reversal from 2007 to the present, from 62 percent favorable and 33 percent unfavorable to 35 and 53 percent respectively. 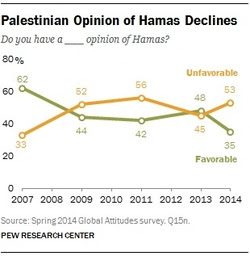 Graph 4, "Levels of Support for Suicide Bombing over Time" shows uneven but clear decline in support for this hideous tactic. 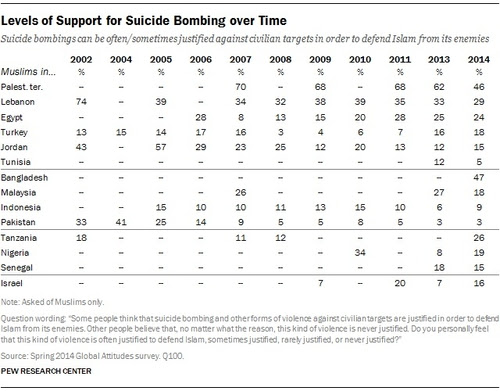 Comment: Whether the issue be Islamism in general, views on Hezbollah, Hamas, or on suicide bombings, Muslim support is substantially reduced, confirming my thesis, first offered a year ago, that Islamism has peaked and is in decline.

(2) The three Palestinian populations of the West Bank, Gaza, and Israeli Arabs differ in many ways:

Of all Muslim groups polled, West Bankers and Gazans have the most favorable view of Al-Qaeda, at 26 percent; extrapolating from the incomplete data Pew offers, it appears that only about 6 percent of Israeli Arabs favor Al-Qaeda, a substantial difference.
Similarly, Palestinians support suicide bombing more than any other group in the Middle East, with Gazans oddly much higher (62 percent) than West Bankers (36 percent). Israeli Arabs again favor this tactic in much lower numbers (16 percent).
West Bankers and Gazans favor Hamas equally; but Gazans, who have experienced its rule first-hand, are far more negative toward the organization. Asked about Islamism in general, Gazans are again much more negative (79 percent) than are West Bankers (57 percent).

Comments:
The Pew poll confirms that Palestinians are the most radicalized people of the Middle East, if not the world, ready to throw everything over and try any wild-eyed experiment. They have tried four over the past century: pan-Syrian nationalism, pan-Arab nationalism, Palestinian nationalism, or Islamism. One shudders to think what will come next.

That said, Israeli Arabs differ substantially from their non-Israeli counterparts.
Other revealing tidbits:

Boko Haram's persistent targeting of fellow Muslims in Nigeria leads to the anomalous finding that Muslims in that country outnumber Christians (76 to 69 percent) in expressing high levels of concern about Islamism.
Even more aberrant, 31 percent of Christians in Lebanon favor Hezbollah, compared to only 9 percent of Sunni Muslims. (Shi'i Muslims favor it by an overwhelming 86 percent.)

Comment: In a twist that may be a harbinger of thing to come, Muslims are sometimes more anti-Islamist than Christians.


Finally, few surveys find 100 percent agreement on anything, but Jewish Israelis unanimously oppose both Hezbollah and Hamas. That even a polling sample reveals total agreement on any topic comes as a mild surprise to anyone who knows the Jews of Israel. (July 14, 2014)
Posted by Steve Lieblich at 5:22 pm