In the good old days, one could encourage killing Jews with impunity. 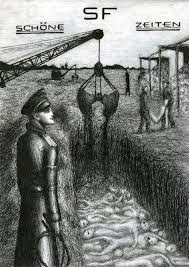 From 1994 to 2011, the European Union donated €4.26 billion to the Palestinian Authority through various channels – and this figure does not take into account individual EU states’ donations to the PA. Much of this money went to finance the Palestinian Arab war against Israel through daily incitement, diplomatic warfare and salaries to terrorists.

Europe has also been very careful in selecting its symbols, especially now that Jews are fleeing the old continent, plagued by anti-Semitism.

Alaa Abdel Fattah was among the secularist leaders of the 2011 uprising that overthrew Hosni Mubarak. He was recently sentenced to 15 years in prison for violating the restrictive new protest law enacted by the regime of Abdel Fattah Al Sisi.

“One should only debate human beings”, he tweeted in 2009. “Zionists and other imperialists are not human beings”. In late 2010 he tweeted: “Dear zionists please don’t ever talk to me, I’m a violent person who advocated the killing of all zionists including civilians”.

Fifty members of the European Parliament nominated Fattah for the Sakharov Prize, named for the Soviet scientist and dissident who must be spinning in his grave. The Sakharov Prize is the EU’s most important prize for human rights.

This Egyptian anti-Semite now has little chance of winnng the award, especially after a counter campaign has been launched to prevent it. But it is enlightening that so many European MPs could even consider honoring such a Judeophobic Arab.

Two years ago, many European MPs supported the nomination of “Breaking the Silence” for the Sakharov Prize. This is the NGO that undermined Israel’s efforts to destroy the terrorists’ infrastructures.

Recently, the International League for Human Rights, the glory of European pacifism, awarded Mordechai Vanunu with the medal bearing the name of Carl von Ossietzky, the German journalist who died in prison during the Nazi period. Both, in their minds,  have made “an honorable service to peace”. So it goes in the European industry of human rights: a convicted spy has been compared to a journalist held in a Nazi concentration camp and murdered.

Then Palestinian and Israeli so-called human rights organizations Betselem and Al-Haq were jointly awarded the human rights award given by the Danish PL Foundation. The director of Al-Haq, Shawan Jabarin, is active in the Popular Front for the Liberation of Palestine, which killed many Israeli civilians and officials.

The NGO Betselem is awarded for spearheading the global campaign against Israel’s security fence, the one built to keep Palestinian suicide bombers out of its major cities.

Many European MPs then supported Farouk Hosni, the Egyptian minister for Culture, as a candidate to lead UNESCO, the UN’s cultural agency. It is the same Hosni who said that he “would burn Israeli books himself if found in Egyptian libraries”.

I can list many other examples of the European incitement against the Israeli people. But I hadn’t imagined that Bruxelles could have even consider awarding those who openly call to slaughter Israeli children in front of their mothers.

There is a German caption, “Schoene Zeiten”, taken from the photo album of Kurt Franz, Treblinka’s last commandant. It means “the good old days”.

Let’s be  honest and admit: Europe’s soul is longing for these “old good days”.