Egyptians inspire a campaign to remove Hamas in Gaza 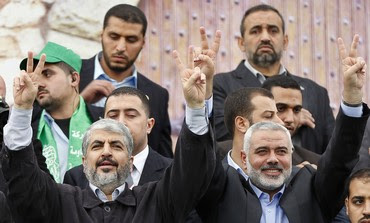 Khaled Mashaal, Ismail Haniyeh at Dec 8 Gaza rally
Photo: REUTERS/Mohammed Salem
Following the Egyptian example, a group of activists has launched a Palestinian version of the Tamarod (“Rebellion”) campaign to remove Hamas from power in the Gaza Strip.
Tamarod is a grassroots movement in Egypt that led the campaign to oust president Mohamed Morsi.
The Palestinian group on Monday shared a video announcing a series of anti-Hamas activities as of November 11.
“Repression and tyranny have reached their peak and we can no longer remain silent,” the group said in the video. “The time has come to reject death under Hamas’s security club.”
The group said that the Palestinian Tamarod movement consisted of youths “of all colors and affiliations.”
Denouncing Hamas as medieval gangsters, the group accused the Islamist movement of torture, sabotage, smuggling, bribery and thuggery.
“Addressing Hamas,” the group said, “We won’t ask you to leave because you are part of us. But you won’t rule after November 11 even if you finish us off. All our options are open, except for using weapons. We are different from you. Unlike you, we don’t use weapons against our brothers. Unlike you, we don’t kill children, the elderly, women and youths. Unlike you, we don’t destroy mosques. We will face you with bare chests.”
...Sources in Gaza said Hamas security forces have arrested two Palestinians on suspicion of “plotting to overthrow the Hamas government.”
The sources said the two men are from the southern Gaza Strip.
Hamas authorities have taken a number of preemptive measures to foil any attempt to copy the anti- Morsi campaign in Gaza.
The measures include imposing travel bans on top Fatah leaders, including Zakariya al-Agha, who was prevented from leaving Gaza to participate in a PLO meeting in Ramallah earlier this week.
Tensions between Hamas and Fatah have escalated in the aftermath of the ousting of Morsi.
While Fatah has come out in support of Morsi’s removal, Hamas has condemned Egypt’s new rulers for carrying out a military coup against a democratically elected president.
On Sunday, Hamas rejected an offer by Fatah to hold long-overdue general elections in the West Bank and Gaza. Representatives of the two rival parties who met in Gaza City failed to reach an agreement on holding presidential and parliamentary elections.
Salah Bardawil, a senior Hamas official, said that by offering to hold elections, Fatah was trying to “cover up for the scandal of resuming peace talks” with Israel.
...He said that Hamas would not allow Fatah to hold elections in Gaza.
Posted by Steve Lieblich at 8:46 am