Hezbollah’s suicide bombing tactics come back to haunt it


Last month IDF chief Benny Gantz said the fringes of Nasrallah’s cloak were on fire; today, the entire robe would seem to be burning

Security forces and civilians stand at the scene of a bombing in the Beir el-Abed, a southern suburb of Beirut, Lebanon, Tuesday, July 9 (photo credit: AP/Ahmed Omar)

The headline of Lebanon’s A-Nahar newspaper on Wednesday said it all: “Following the explosion in Beir el-Abed, does Dahiyeh fear suicide bombers?”

There’s a terrorism irony for you. Hezbollah, the organization that spearheaded the use of suicide bombers in the Middle East in the beginning of the 1980s, now has to cope with a new reality: its Sunni enemies in Syria and Lebanon are using the group’s trademark modus operandi against it.

Fifty-two people were injured in Tuesday’s blast in the heart of Hezbollah’s home turf, and although the target has yet to be clearly established, injuries and destruction to property aside, the biggest blow was to the militant Shiite group’s sense of security. The group’s senior officials will now have to watch out not only for Israeli intelligence, but also for Sunni extremists wearing suicide vests or driving cars rigged with explosives.
According to A-Nahar, Sheikh Hassan Nasrallah and the group’s upper echelons had anticipated that a car bombing was in the works long before Tuesday’s attack. This was because of Hezbollah’s deep involvement alongside Bashar Assad’s forces, in battles both against Syrian opposition forces and radical Sunnis in Lebanon, like Sheikh Ahmed el-Assir. Extra security precautions were already in force in the streets of Dahiyeh. Yet the man who transported the car to its destination on Tuesday was able to evade the group’s security checkpoints and detonate the blast.
A source close to the group told A-Nahar that Hezbollah anticipates continued suicide attacks against Shiite targets in general and its assets  in particular, following the model of sectarian violence in Iraq. There, Sunni terrorists have carried out a relentless stream of murderous attacks against the Shiite population, to instill perpetual fear.
Hezbollah’s current troubles don’t end with suicide bombers either. Even if the group’s security forces manage to thwart future attacks, Sunni terror groups showed in a recent strike that they are also capable of firing rockets into Dahiyeh.
Hezbollah is also absorbing a high number of fatalities fighting in Syria — “a triple digit figure” as one Israeli defense official put it – and sustaining  thousands of injured, most of whom never make it back to active duty.
Less than a month ago, IDF chief of General Staff Lt. Gen. Benny Gantz remarked that “the fire has reached the fringes of Nasrallah’s cloak.” Now, the whole cloak is burning. 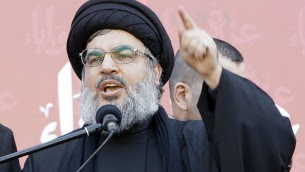 Hezbollah leader Hassan Nasrallah in one of his last public appearances in December, 2011 (photo credit: AP/Bilal Hussein)
Meanwhile, Hezbollah’s ally to the east, the embattled Assad, for whom the group chose to risk its position in Lebanon and its men in Syria, has failed to complete the comeback much of the Arab press had led readers to anticipate. After the conquest of Qusair near the Lebanese border, where rebels held sway for more than a year, it appeared Assad’s Hezbollah-bolstered forces were gaining the upper hand and would go on to easily conquer Aleppo. That’s not how things have turned out thus far.
Fighting around Aleppo continues and Assad’s forces control only some 40 percent of Syrian territory, focused on the north-west. In the rest of the country, slowly but surely independent cantons are sprouting. This is particularly the case in the north-east, where there is very little fighting and a semi-autonomous Kurdish entity is putting down roots.
Still, the Syrian opposition is not impressing anybody with its managerial abilities either. Just this week, Ghassan Hitto, who was supposed to put together an alternative to Assad’s government, quit his job amid crippling infighting among Assad’s opponents.
At this rate, the Syrian civil war looks like it may last for years, without clear results and with the country’s institutions steadily crumbling. How will it all end? In Syria’s case, even fools dare not prophesy.

Hezbollah leader sheik Hassan Nasrallah, left, speaks with Syrian President Bashar Assad, center, and Iranian President Mahmoud Ahmadinejad, right, upon their arrival for a dinner in Damascus, Syria, February 25, 2010 (photo credit: AP/SANA)
Despite the instability in Syria and Lebanon, the Hezbollah-Assad coalition is holding. Indeed, the two are becoming interdependent, a much different situation from the one that prevailed in the days of Assad’s father Hafez. The latter didn’t hesitate to use his army against Hezbollah when he thought it threatened Syrian interests in Lebanon.
Today, the ever-tightening alliance can be witnessed both in the Shiite organization’s dispatch of troops to fight in Syria and in the continued transfer of weapons from Syria to Hezbollah in Lebanon.
On Tuesday, a Free Syrian Army spokesman said an attack last week on the Syrian port of Latakia — blamed in some quarters on a resolutely silent Israel — targeted a weapons depot that held Russian-made anti-ship missiles, presumably “Yakhont” missiles. The spokesman stressed that the FSA was not behind the attack.
If so, Latakia was doubtless not the final destination, and the shipment was evidence of the abiding Assad-Nasrallah alliance: Despite all the risks of such arms transfers, the cargo was likely scheduled for delivery to Hezbollah.
Posted by Steve Lieblich at 11:12 pm