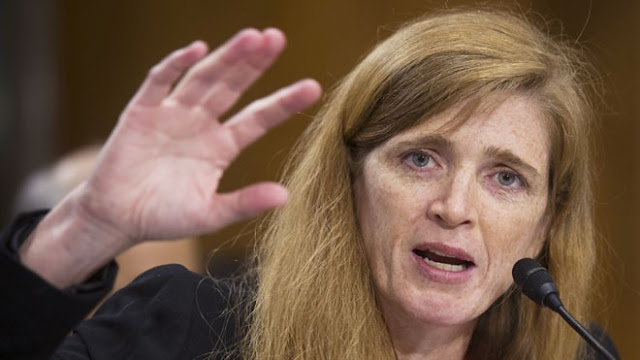 July 17, 2013: U.S. ambassador to the U.N. nominee Samantha Power testifies at her confirmation hearing before the Senate Foreign Relations Committee in Washington. (AP)
Wednesday’s confirmation hearing for Samantha Power, President Obama’s pick for U.N. ambassador, should not have been such smooth sailing. Over the past four and a half years the Obama administration’s U.N. policy has lurched from failure to failure and Power has not been a mere passenger along for the ride.
To name but a few disasters, there has not been a binding Security Council sanctions resolution on Iran since June 2010. Despite Washington’s numerous pleas, the Chinese reiterated this week that they were “not in favor of increased new pressure or sanctions against Iran.”
The Palestinians ignored the president’s personal appeal not to use the U.N. to upgrade their status unilaterally. With the U.S. voting against, “Palestine” became a U.N. non-member observer state.

Samantha Power is not a blank slate on Obama U.N. policy or President Obama’s use of the U.N. to intimidate our closest ally.  If confirmed, expect affairs to get worse.

Regardless of American views, U.N. jobs have been repeatedly filled by grossly inappropriate candidates.
- Iran is on the U.N.’s top women’s rights body.
- Both North Korea and Iran have served as President of the U.N. Conference on Disarmament.
- Richard Falk, the antisemitic, Boston-terror apologist, continues to hold the job of the UN’s Israel “investigator.”
- The U.N. has made zero progress in agreeing to a definition of terrorism. The drafting of a comprehensive convention against terrorism is hopelessly deadlocked.
- The U.N. held two more racist anti-racism conferences, “Durban II” in 2009 and “Durban III” in New York on the 10th anniversary of 9/11, over administration objections.
- Every substantive U.S. proposal to reform the Israel-bashing U.N. Human Rights Council was thrown out by the General Assembly in June 2011. The U.S. was outnumbered 154 to 4.
- In Syria, there are now over 100,000 deaths and yet U.N. investigators are waiting outside the country. Humanitarian access to Sudan is still blocked, while the killing in Darfur goes on.
The actual record, notwithstanding, Susan Rice ended her term by appearing before the cameras at U.N. Headquarters on June 25 and reciting a list of Team Obama’s purported achievements. Among other things, Rice claimed that she had saved American taxpayer dollars going to the U.N. and had created new “transparency.”
Actually, in 2010 the Obama administration stopped reporting the total U.S. contributions to the U.N. and has never produced this figure since. Every indication is that the amount has gone up, not down.
So where does Samantha Power fit in this sorry state of affairs? In general, Power will parrot the Obama/Rice mantra that it’s all about issuing in “a new era of engagement to the United Nations.”
In fact, Deputy National Security Advisor for Strategic Communications and Speechwriting, Ben Rhodes informs us that Power has already been hard at work applying the “engagement” agenda. The specifics reveal a troubling record on Israel, a subject which has become a touchstone for her appointment.
Speaking to the Israeli paper Haaretz in June – as part of an evident campaign to repair her pro-Israel credentials – Rhodes said: “Sam had been the point person at the White House on all issues related to Israel at the U.N.”
This is not a plus.
The U.N. Human Rights Council, the U.N.’s top human rights body, might be described as Israel-delegitimization headquarters. But instead of delegitimizing the delegitimizers, Power has urged the president to do just the opposite and lend the prestige of the world’s leading democracy to this human rights sham. Consistent with her advice, the administration joined the Council and remains a member.
An unnamed “senior U.S. official” also told Haaretz: “Power claimed…in discussions with the White House… that joining the Human Rights Council would give the United States better tools to protect Israel from discrimination…” and he continued: “It was manifestly true…We were able to rally Europeans to stand with us against anti-Israel resolutions…creating…a moral majority.”
The claim is manifestly untrue.
At its main annual anti-Israel session this past March, the Council adopted six anti-Israel resolutions and not a single European voted with the U.S. against even one of them.
Rhodes went further in his description of Power’s involvement. “Samantha has been the White House official in contact with our team in the Human Rights Council…She was helping set the policy but was also the person to sign off on the language of the statements the administration and our mission in Geneva issued.”
This is a damning admission. Israel has been refusing to engage with the Council for over a year – which is awkward for an administration claiming that engagement is doing just fine.
So this year in January and June, U.S. statements at the Council publicly encouraged Israel to re-engage. In effect, to return to the back of the bus. The public rebuke in such a hostile environment was wrong and it signals some ugly arm-twisting of Power’s Israeli “friends” behind the scenes.
Rhodes also said that Power was a key player in other Obama-U.N. moves: the U.S. decision to boycott the Durban II conference in 2009, the handling of the Turkish Mavi Marmara flotilla crisis in May 2010, and “stopping” the unilateral Palestinian initiative in the United Nations.
The real record:
Samantha Power, therefore, is not a blank slate on Obama's U.N. policy or the president’s use of the U.N. to intimidate our closest ally. If confirmed, expect affairs to get worse.
Posted by Steve Lieblich at 3:59 pm