... advertising executive Kirk MacGibbon said he had received complaints from Jewish people on [a billboard for Hell Pizza depicting Hitler] but none from Catholics on the use of the Pope in a Hell Pizza advertisement now on display in the city.

"Isn't it interesting how only the Jews complain? ... 'Don't forget – but don't look when we invade Palestine'..." he said. 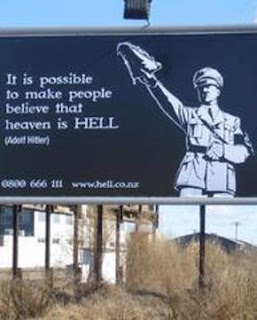 ... Hell Pizza appeared to be bowing to public pressure on Thursday, removing the controversial Hitler poster from Lincoln Road, Addington, only for it to reappear in St Asaph Street, in central Christchurch, yesterday morning.

The billboard ... has drawn widespread condemnation from the Jewish community. The New Zealand Jewish Council yesterday lodged an official complaint with the Advertising Standards Authority, while Israel's honorary consul to New Zealand, David Zwartz, described the advertisement as "distasteful" and "insensitive".

...Zwartz said MacGibbon's suggestion that the Holocaust was used as an excuse for Israel's present-day actions was a "very warped attitude...It's as distasteful as using Hitler in their advertisements..." ...

...MacGibbon said the ads were successful and were not in danger of turning off customers...
Posted by Steve Lieblich at 7:33 am