Just what the doctor ordered 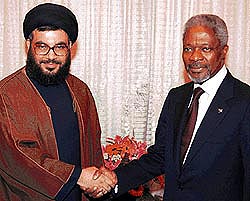 The highlight of Annan's visit to Beirut was his meeting on Tuesday with Nasrallah (photo: Reuters)

.....The highlight of Annan's visit to Beirut ... was his meeting on Tuesday with Hizbullah leader Sheikh Hassan Nasrallah held at Annan's request. During the meeting, at Hizbullah's headquarters in Beirut's southern district, Nasrallah told the UN chief that his group would continue its struggle until the liberation of all Lebanese territory. Annan reportedly thanked the Hizbullah leaders for maintaining law and order in the south since Israel's pullout. The meeting was unlikely to have gone down well with the United States and Israel who consider Hizbullah an "enemy of peace." ....
Posted by Steve Lieblich at 5:00 am