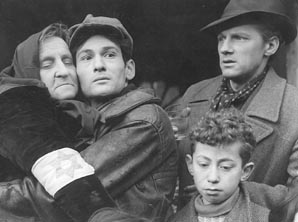 ...on April 19, 1943 - the day before Pessah - began the uprising of the Warsaw Ghetto. It would take four days before the Germans, backed by artillery and tanks, would break the back of the resistance - but it was almost a month before their commander, SS General Jurgen Stroop, reported to his superiors that "the Jewish quarter of Warsaw no long exists."

The Warsaw uprising was the first urban revolt in Nazi-occupied Europe. In Jewish history, it would hold an even more significant place - a counter to the "sheep to the slaughter" image of six million Jews surrendering passively to death, an affirmation that Jews could fight. Numerous accounts by eyewitnesses and historians over the past 63 years have left the impression that there is nothing new to be said about the event. However, history is now being called to task for having overlooked a central element of the story.

... former defense minister Moshe Arens...has devoted the past three years to researching the role played in the uprising by Betar, the youth movement of the right-wing Revisionist camp.
Arens grew up in Riga, where Betar was founded by Ze'ev Jabotinsky, and he himself served as head of the Betar branch in the United States which his family reached on the eve of the war.

...On the basis of research into Jewish, Polish and German sources, as well as interviews with surviving participants in Israel and Poland, Arens has produced articles on the subject published in Jewish scholarly journals. He argues that the commonly accepted narrative of the uprising, which assigns Betar a peripheral role at best, is skewed. Betar's fighters were the best armed and trained in the ghetto, he says. It was Betar that raised the Jewish and Polish flags that agitated the German high command and transfixed the Polish population watching the battle from afar, and it was to the Betar sector that Stroop referred when he described the "main Jewish battle group."

Betar's leaders were killed in battle while key leaders in the other Jewish camp, dominated by left-wing Labor Zionists, survived. It was the latter's version that set the tone of the subsequent narrative, leaving a large hole at the center of one of the epics of modern Jewish history by playing down, or totally ignoring, Betar's role. Despite Arens's admittedly partisan interest in the subject, his writing avoids polemics and his argument is backed by well annotated sources....

(follow the link for the full article, a detailed narrative of the uprising)

.... it had not been a battle whose outcome would be measured in casualties or territory. It had been a battle for dignity and the Jews had clearly triumphed.

This was reflected in the admiration expressed by underground Polish publications which often had to overcome innate anti-Semitism. "The courageous resistance of the Warsaw Ghetto has been going on for a month," wrote the newspaper Gwardzidsta. "It is the strongest and most prolonged act of resistance in the occupied territories."

Several newspapers noted that it was the first time that Jews, as such, had been engaged in battle since the Bar-Kochba revolt. "For the first time in 18 centuries they have risen from their humiliation," wrote a Catholic youth newspaper. "Who knows whether the spirit of Israel will not rise out of the ashes of Warsaw."

Another underground paper, Mysl Panstwowa (Government Thinking), wrote: "The Jews have risen to the level of a fighting people. Even if they do not fight for their existence - which is out of the question, considering the absolute superiority of the enemy - they have nonetheless demonstrated their right to national existence."
Posted by Steve Lieblich at 9:50 am