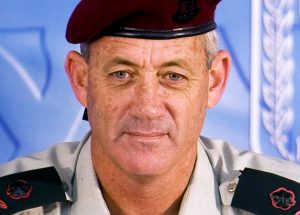 Benny Gantz, photo via Wikimedia Commons
Unilateral disengagement from the West Bank, which Israeli PM candidate Benny Gantz seems to support, would have far-reaching adverse implications for Israel in the security, economic, social, infrastructural, and ecological spheres.
For all his efforts to keep his views on key national issues under wraps, so as to make his premiership bid appealing to the largest possible number of Israelis, former IDF Chief of Staff Benny Gantz has indicated his readiness to apply the highly controversial unilateral disengagement formula that Sharon applied to Gaza in 2005 to the West Bank as well.

“We need to find a way in which we’re not controlling other people,” Gantz told the daily Yediot Ahronot in his first interview as a PM candidate. “[The unilateral disengagement] was a legal move, a decision made by the Israeli government and carried out by the IDF and the settlers in a painful, but good manner. We need to take the lessons learned and implement them elsewhere.”

Leaving aside the ambiguity of these well-worn terms (e.g., most of the world views Jewish neighborhoods in east Jerusalem as “settlements” while Israelis consider them an integral part of Israel), or the feasibility of evacuating some 140,000 Jewish residents from their homes with no Palestinian quid pro quo, Gantz’s thinking seems to be predicated on dated suppositions that have long been overtaken by events.
The political and strategic precepts underlying the Oslo “peace” process, which Gantz echoes, vanished long ago. The PLO has unequivocally revealed its true colors: its total disinterest in peace, unyielding rejection of the idea of Jewish statehood, and incessant propensity for violence and terrorism. The US, which rose to world preeminence after the disintegration of the Soviet Union and the east European bloc, has largely lost this status over the past decade, while Russia has recovered much lost ground and regained a firm military and political foothold in the Middle East. Tehran is rapidly emerging as regional hegemon, with its tentacles spreading from Yemen and Iraq to the Mediterranean Sea and its dogged quest for nuclear weapons continuing apace under the international radar. Even the terror groups of Hezbollah and Hamas pose a far greater threat to Israel’s national security than they did a decade ago. Under these circumstances, Israel’s withdrawal from the West Bank’s Area C would constitute nothing short of an existential threat.
Nor does Israel need to find a way to stop “controlling other people,” as Gantz put it, for the simple reason that its control of the Palestinians ended some two decades ago. In May 1994 the IDF withdrew from all Palestinian population centers in the Gaza Strip. In January 1996 it vacated the West Bank’s populated areas (the Oslo Accords’ Areas A and B), comprising over 90% of the West Bank’s Palestinian residents, and handed control of that population to the Palestinian Authority (PA).
Effectively realizing PM Rabin’s vision of ending Israel’s control of the Palestinians without creating a fully-fledged Palestinian state, this move should have ended the debate about the supposed contradiction between Israel’s Jewish and democratic nature. These territories (Gaza and Areas A & B) are to all intents and purposes independent entities that will never become a part of Israel.
This in turn means that the real dispute between Israel and the Palestinians, as well as within Israel itself, no longer revolves around the end of “occupation” but around the future of East Jerusalem and Area C. And since Area C (which is home to only 100,000 Palestinians) includes all Jewish West Bank localities, IDF bases, transportation arteries, vital topographic sites, and habitable empty spaces between the Jordan Valley and the Jerusalem metropolis, its continued retention by Israel is a vital national interest. Why? Because its surrender to a potentially hostile Palestinian state would make the defense of the Israeli hinterland virtually impossible – and because these highly strategic and sparsely populated lands are of immense economic, infrastructural, communal, ecological, and cultural importance, not to mention their historical significance as the bedrock of the millenarian Jewish ancestral homeland.
Posted by Steve Lieblich at 9:41 pm