Israel warned it was closer to war in Gaza than it had been in years after Palestinian militants fired dozens of mortars at Israeli towns and Israel’s military responded with heavy airstrikes across Gaza.

.. waves of missiles were fired out of Gaza into southern Israel. At least three soldiers were wounded. One shell fell into the yard of a kindergarten, spraying the front of the school with shrapnel.

Israel accused the militant group Islamic Jihad of doing most of the shelling but said Hamas, the Islamist faction which controls Gaza, also participated in the attack. 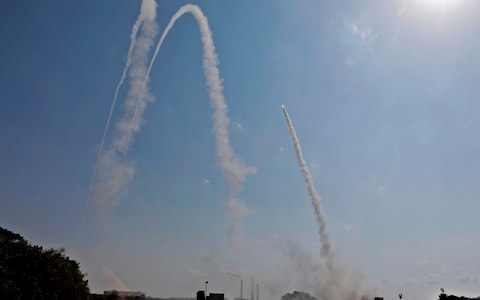 Many of the projectiles fired from Gaza were shot down by Israel's Iron Dome missile system CREDIT: MENAHEM KAHANA/AFP/GETTY IMAGES

...Israel Katz, the Israeli intelligence minister, said the country was closer to war with Hamas than it had been at any point since 2014.


“We are the closest to the threshold of war since Operation Protective Edge,” he said. “We don’t want it, and the other side doesn’t either, but we have our red lines.”

The shelling from Gaza into Israel was widely condemned internationally and Britain said the “indiscriminate attacks” were “completely unacceptable under any circumstances.”

The mortar shells and rockets fell in and around Israeli communities near the Gaza border, triggering air raid sirens and sending thousands of Israelis running for bomb shelters. The Israeli military said many of the projectiles were intercepted by the Iron Dome missile defence system.

Video from the Israeli kindergarten showed the front of the building had been pockmarked by shrapnel from a mortar. The shell struck at around 7am, before any children had arrived at the school. “Seven o’clock is the busiest time of day. This could have ended differently,” said Merav Cohen, an Israeli mother who lives near the kindergarten.

The armed wings of Hamas and Islamic Jihad jointly claimed responsibility for the shelling...

The Israeli military said the 107mm mortars fired by Islamic Jihad were supplied by Iran, which has long funded the group as a proxy force against Israel.


“There’s no doubt that the Iranians are involved...” Lt Col Conricus said.

...Alistair Burt, a [UK] Foreign Office minister, was in Gaza on Tuesday and condemned the Palestinian shelling.


"Indiscriminate attacks against civilians, especially those that risk killing or injuring children, are completely unacceptable under any circumstances,” he said.

Posted by Steve Lieblich at 7:51 am