From PMW Bulletin, May 23, 2017, by Itamar Marcus and Nan Jacques Zilberdik:

Who should the world believe?

What Abbas told Trump today,
or what Palestinian leaders tell their people regularly?

Abbas to Trump in Bethlehem:


"... two-state solution along the borders of 1967, the state of Palestine with its capital as East Jerusalem living alongside Israel in peace and security." 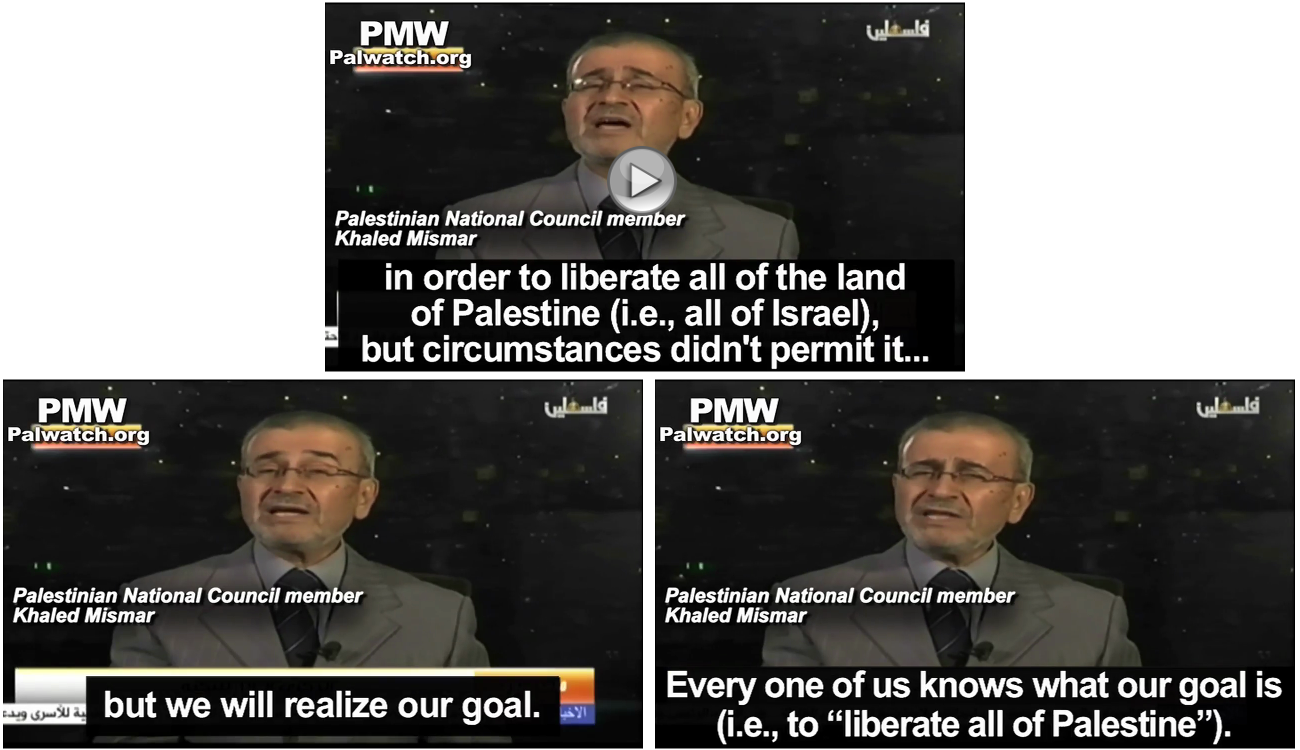 PA Chairman Abbas and other PA leaders often reiterate to foreign audiences that they desire peace with Israel and that they support and want to implement the two-state solution. Today Mahmoud Abbas told US President Donald Trump:


"Once again, we reassert to you our positions of accepting the two-state solution along the borders of 1967, the state of Palestine with its capital as East Jerusalem living alongside Israel in peace and security."
[The New York Times, May 23, 2017]

However this is contradicted by numerous statements by PA leaders to their own people and even to Palestinian children. PA religious leaders have even taught recognizing Israel is prohibited by Islam.

Most recently Khaled Mismar, member of the
Palestinian National Council, the legislative body of the PLO, stated that "everyone knows" that despite agreeing to less, the real Palestinian goal is to eventually take all of Israel:

Palestinian National Council member Khaled Mismar: "The revolution broke out in 1965 (i.e., first Fatah terror attack) in order to liberate all of the land of Palestine (i.e., all of Israel), but circumstances didn't permit it... We have fought, and we have withstood everything, all the plots, but we will realize our goal. True, we agreed to receive only 20 or 22 percent of Palestine (i.e., West Bank and Gaza Strip), but a right is never lost as long as someone demands it. Every one of us knows what our goal is (i.e., to 'liberate all of Palestine')."  [Official PA TV, Topic of the Day, May 15, 2017]

Another Palestinian leader also recently stressed that Palestinians do not intend to change their ideology. All of Israel belongs to Palestinians and is part of "Palestine."

The general coordinator of the PLO's National Committee for Commemorating Nakba Day stated in a speech that: "We will not relinquish one grain of sand from Jaffa, Haifa, Lod or Ramle" - all of which are Israeli cities.


General Coordinator of PLO's National Committee for Commemorating Nakba Day, Muhammad Alyan: "We want to say regarding what happened in 1948: No matter how great the losses and sacrifices may be, we will not relinquish one grain of sand from Jaffa, Haifa, Lod, or Ramle (i.e., all Israeli cities). Let this occupation do what it wants., We are staying here, rooted like the olive tree, fighting, and defending [the homeland]."
[Official PA TV, broadcast for Nakba Day, May 15, 2017]

Palestinian Media Watch has exposed similar statements by other Palestinian leaders, such as Fatah Central Committee member Azzam Al-Ahmad who said that he is "certain" that a Palestinian state in the West Bank will lead to "Palestine" erasing Israel - just like North Vietnam took South Vietnam.

The PA continuously shows its definition of "Palestine" through its use of maps that include all of the State of Israel in "Palestine," for example on plaques of honor or logos , in posts on Facebook describing locations in Israel as situated in "Palestine," or in statements describing "Palestine" as stretching "from the Jordan River to the Mediterranean Sea."

PA religious leaders teach Palestinians that Islamic law forbids them to "relinquish even one grain of sand of Palestine," and PA TV's children's program The Best Home reiterates the message that "all of Palestine will return to us"  and that its size equals the PA areas and Israel combined.
Posted by Steve Lieblich at 7:07 am