Over a million PA Arabs plan to leave Israel

More Arabs are leaving Judea and Samaria every year ... 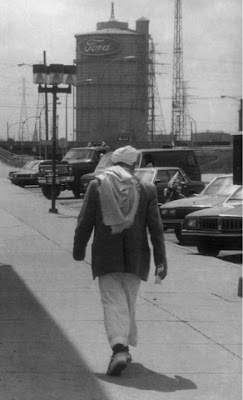 An Arab immigrant in Dearborn, MI, USA, outside a Ford plant c. 1950s.

A CVS in an Arab neighborhood of Dearborn, MI. 2001.
(Images from “Arab Americans in Metro Detroit: A Pictorial History”)
Arab media reports over 20,000 PA Arabs leave Israel each year, says numbers are growing.

...The vast majority of Arabs who leave Israel emigrate to either the United States or South America. ...a large percentage visit Israel during the summers and vacations.

Both the Palestinian Authority and Hamas do not make ensuring their residents have adequate access to education, jobs, and medical centers a priority. Most of the international aid funneled to Gaza and the PA goes into financing rockets and terror tunnels, paying terrorists and their families salaries, and lining the pockets of corrupt PA politicians and terror leaders.

As a result, there is large gap between rich and poor, with much of the Arab public in these areas impoverished and uneducated. ...even those who do complete college and find jobs often earn between 1500 NIS to 2500 NIS each month working in Palestinian Authority-controlled areas. Those working for Israelis enjoy a higher income by far, but Israeli firms in Judea and Samaria that employ Palestinian Arabs, such as Soda Stream and those in the Barkan Industrial Park, are subject to boycotts and other threats.

Israeli Arabs are highly educated, in contrast and can be found in every sphere of economic activity earning good wages, including doctors, pharmacists,
Posted by Steve Lieblich at 4:45 pm