France hosts a Purim Shpiel: a lamb survives 70 marauding wolves - a tribute to the Shepherd 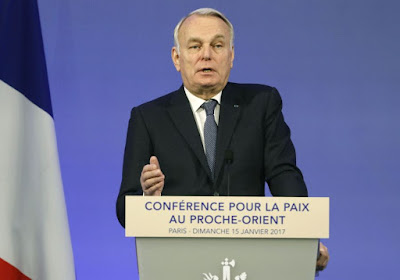 
There in Paris, inside the French Foreign Ministry, tables were set for representatives of some 70 countries, including more than 30 foreign ministers.

At the head of the hall was an elevated area with a podium, a single French flag and, in white letters against a blue background, the following was writ large: "Middle East Peace Conference, Paris – Sunday, January 15, 2017."

Yes, another Middle East "peace conference". Never mind that neither of the parties who are supposed to be making peace – the Israelis and the Palestinians – were present, another Paris peace conference was under way, nonetheless.

...Few expect [anything tangible] to emerge from Sunday’s event in Paris, especially given the fact that in five days there will a new president in the United States widely expected to object to this type of Middle East initiative so adamantly opposed by one of the concerned parties: Israel.

No, this conference is likely to be remembered along with some of the other international meetings in Paris, convened amid great fanfare, that led nowhere.

One such conference was the 2008 parley organized by then president Nicolas Sarkozy – the Union of the Mediterranean – that brought together leaders from some 40 countries around the Mediterranean, including former prime minister Ehud Olmert and Syrian President Bashar Assad, who stood on the very same stage without speaking or looking at each other.

That conference, widely viewed then as one of Sarkozy’s vanity projects, led to nothing.

Sarkozy also was instrumental in establishing the Group of Friends of the Syrian People in 2012, which convened in a number of different locations, including Paris, to discuss the Syrian situation. That, too, has not been a resounding success.

Yet, the French were adamant in going ahead with Sunday’s parley, even though they obviously know that – with the absence of Israel’s participation and the emergence of the Trump administration in Washington – the likelihood of its success is very slim.

Why, then, go ahead with it at all?

Firstly, because this is what the French do – they organize and hold international conferences.

Secondly, because the French feel a historic responsibility toward the Middle East – primarily toward Lebanon and Syria, but also toward Egypt and Israel. They do not see the Levant as a remote corner of the world, but rather a region to which they have strong historic ties and responsibilities.

Thirdly, because of domestic political considerations. And there are two distinct elements at play here.

French President Francois Hollande’s left-wing government has been consistently criticized by the Left for not being leftwing enough. After Hollande came to Israel in 2013, he was criticized inside his party for cozying up too much to Prime Minister Benjamin Netanyahu.

This conference shows the French Left that the government has not forsaken the plight of the Palestinians.

And there are also cold electoral calculations at play, as well.

The Muslim electorate is a significant voting bloc in France, and for a large part of that bloc, the Palestinian issue remains very important. This conference is a way of showing them that the issue is also important for the Socialist Party. Keep in mind that the French will be going to the polls in just a few months to vote in a new president, so the Muslim voting bloc will be particularly significant.

Finally, the French are hosting this conference because there remain few vehicles in the world that lift up a country’s international diplomatic stature – if only momentarily – than hosting a Middle East peace conference.

Paris has, over the last number of years, bet on all the wrong horses in the Middle East: Saddam Hussein in Iraq; Assad in Syria; Yasser Arafat in the Palestinian Authority; Hosni Mubarak in Egypt; and Rafik Hariri in Lebanon.

But hold a Middle East peace conference and maybe – just maybe – none of that will matter and some of that lost diplomatic prestige and luster can be regained.

Then again, maybe not.

Posted by Steve Lieblich at 6:54 am