From JPost, 6 June 2016, by ADNAN OKTAR, a Turkish Muslim TV commentator who has authored more than 300 books in 73 languages on political, faith-related and scientific topics:

The biased, baseless outlook regarding Zionism in the Islamic world has over time warped into a misplaced phobia of Jewish people. 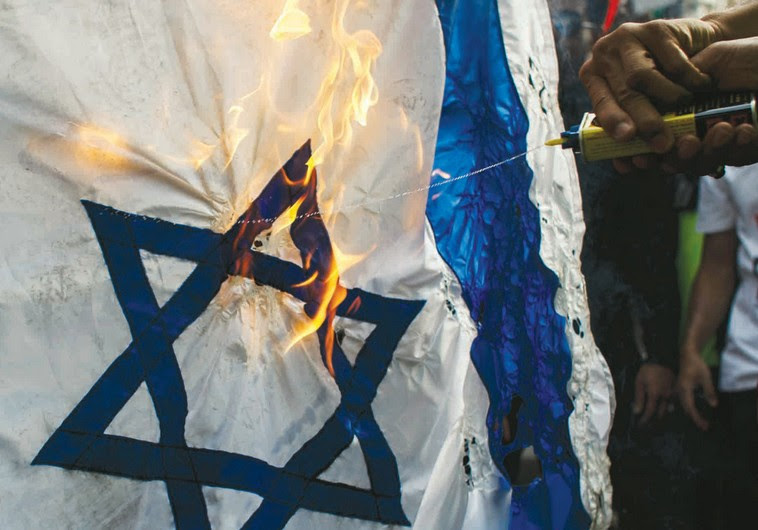 Demonstrators burn an Israeli flag in front of the Israeli Embassy in Bangkok.
(photo credit: REUTERS)
Born of the Westphalian peace of 1648, nationalism spread across the world in earnest with the onset of the French Revolution in 1789 – so much so that the dreams of a nation state shaped international politics for 150 years. It was nationalist enthusiasm which fueled wars of independence. Those who were responsible for these wars burned with the desire to unite those of the same cultural background, the same language and living in the same region under one banner. However among the hundreds of nationalist liberation movements, one is invariably singled out, maligned and placed at the center of sinister conspiracy theories.

Aspiring to reunite and emancipate the Jewish people scattered around the globe under one state, this movement for independence, named after the Mount Zion in Israel, came to be called Zionism. The Jewish people, a diaspora community, banished from everywhere it had sought refuge, determined to establish its own state in its ancestral lands.
While every contemporary nationalist movement enjoyed friends and suffered enemies, Zionism faced unique, unbridled hostility from virtually every political current (save, in large part, Protestant Liberalism).

Following suit, non-aligned nations vehemently opposed the reestablishment of Jewish sovereignty in any part of the historic Jewish homeland.
Today, anti-Israelism under the guise of anti-Zionism has become the main expression of anti-Semitism, of enmity to Jews.

An entire nation is targeted, for verbal or physical violence, women, children, elderly, innocent and oppressed alike – simply because of their Jewish nationality, and their demand to be seated at the table of nations with all of their peers.
Despite the presence of 22 Arab countries, tied to a single ethnic origin, only the desire of the Jewish people to establish its own sovereign state has been subject to fierce opposition.
Nevertheless, Israel is concurrently a safe haven for millions of persecuted people, those who fled the Nazi genocide, Soviet brutality or violence in many other countries.
Nearly one million Jews, leaving all of their assets behind, were forced to immigrate from Arab countries in the aftermath of the 1948 war.

Yet, Jewishness is not understood in racial or traditional ethnic terms in the State of Israel, unlike its counterparts. It is a country of multiculturalism, one which hosts varying faiths and diverse ethnic backgrounds, in contrast to its Arab neighbor countries. One-fifth of the Israeli population is Arab, while the overall, majority Jewish population is comprised of over 70 cultures speaking 35 languages and dialects. Additionally, Arabic is an official language, alongside Hebrew, in the state of the Jews. The sacred places of all faiths are protected: There are nearly 400 mosques, all safeguarded since the declaration of Independence of the State of Israel.

Despite this fact, Zionism is equated in ever widening circles with a conspiracy to control and exploit the whole world.

Anti-Semitism is the only explanation for this phenomenon, a modern rendition of old, irrational Judeophobic rhetoric. Zionism, despite the well-accepted consensus in the Middle East, is simply the aspiration of the Jewish nation, who have been oppressed, persecuted and suffered greatly throughout history, to live freely and in safety in their ancestral lands. The Jewish people have been a part of these lands for 3,500 years, and were expelled from there long ago by the oppressive hand of the Roman Empire. The emergence of the State of Israel is the realization of this small nation’s dream of a homeland where they can ultimately live in safety and govern themselves.
Many if not most Muslims are unaware of the true meaning of Zionism. When asked about the reasons they oppose it, they define Zionism as “an evil system which aims to destroy the world order” and falsely believe that Zionism is the source of all evil. Moreover, many Muslims are under the illusion that anti-Israelism is piety, and this makes them unjust when it comes to Jews. Therefore, it is crucial to properly define Zionism to the Muslim-Arab public and to put an end to so much senseless Jewish hatred.

Hatred of the State of Israel and Zionism do not comply with the spirit of the Koran.

Murdering innocent Israelis or promoting expulsion of Israelis from their ancestral homeland, as is increasingly common not only in the Arab world but in European leftist circles, is symptomatic of a lack of conscience. The state of Israel may have its faults – which state does not? For its excesses and where it has committed crimes, it should be judged based on the law. Islam has a principle of “individual criminal responsibility” just as we see in international law. An entire state cannot be incriminated or punished without making any discrimination between the innocent and the guilty or the right and the wrong, and irrespective of context. The claim of some Muslims that “they fight against the Jewish people in the name of the Koran” is an act of ignorance and in violation of the Koran since God explicitly grants the Jewish people the right to live in the Holy Land: “Remember when Moses said to his people, ‘My people! Remember God’s blessing to you when He appointed Prophets among you and appointed kings for you, and gave you what He had not given to anyone else in all the worlds. My people! Enter the Holy Land which God has ordained for you. Do not turn back in your tracks and so become transformed into losers’” (Koran 5:20-21).

God informs us in the Koran – this is also promised in the Torah (Deuteronomy 30) – that the Jewish people shall gather and live in these lands in the End Times: “We said to the Children of Israel after that, ‘Dwell in the land and, when the promise of the hereafter comes, We will gather you as a mingled crowd’” (Koran 17:104).

Despite these unambiguous Koranic injunctions, no one in the Middle East seems to support or approve of Zionism.

On the contrary, hostility to Zionism is now assumed, and to buck that trend is to risk one’s life. In truth, Muslims are ordered by the Koran to act fairly and conscientiously, hence should advocate not only for the rights of the Palestinians but also the Jewish people as well.

Muslim intellectuals, religious scholars and politicians should stand out among others not by fueling the existing hatred for the Jewish people but by emphasizing the beauty of coexistence in these Holy Lands. They should explain that advocating for the rights of Palestinians is not tantamount to exhibiting hostility to Jews.

It is an incontestable right for Israelis to have the desire for self-determination, as the Palestinians do. When the Arab-Muslim world recognizes Israel’s right to exist as an independent and sovereign state, this century-long bloodshed will cease.

The greatest benefit here would certainly be shared by the Palestinian people, who suffer due to war and security precautions.
Needless to say, the spirit of peace and brotherhood is an urgent need for the local community. The sporadic warfare has cost a fortune, which could have been used for the welfare of people instead. More important, this useless war has claimed the lives of thousands of young and elderly, civilian and soldiers alike. Once the Arab world decides to acknowledge Israel as a neighbor, it can focus on developing the well-being of the Palestinian people, and of the other Arab peoples doing far less well than the Palestinians, too. The effort and means spent on conflict, destruction and hostility will be transferred to the construction and embellishment of the region; swords made into plowshares, hatred turned to science, art and technology.

The is incumbent on Muslim intellectuals everywhere.
Posted by Steve Lieblich at 10:59 am