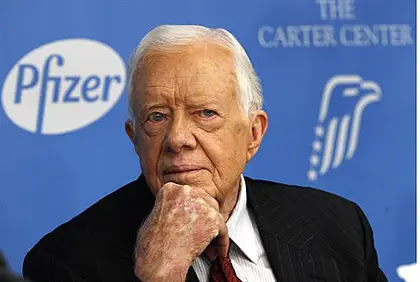 Israeli President Reuven Rivlin has refused to meet former US PresidentJimmy Carter in an upcoming visit to Israel, the Palestinian Authority (PA) and Gaza due to his anti-Israeli views...

A senior diplomatic source told the news agency that Carter, who has a long history of antagonism towards Israel, is "permanently damaging" to Israel and that Israel's leaders should refrain from meeting with him, on principle.

Rivlin's advisors have said the same.

In May 2014, the former President supported the Palestine Liberation Organization's (PLO) unilateral push to join international organizations in breach of the ongoing peace talks with Israel and the 1993 Oslo Accords.

The year before, he called on the European Union (EU) to label products coming from "illegal Israeli settlements" - despite the fact that Israel's presence in Judea and Samaria is legal under international law.

In 2006, Carter wrote a book entitled "Palestine: Peace Not Apartheid." His claims in the book, which he continued to espouse even after factual errors were revealed, led the reporting accuracy group CAMERA to say that the ex-president “clearly has an Israel, and even a Jewish problem.”
Posted by Steve Lieblich at 12:05 pm