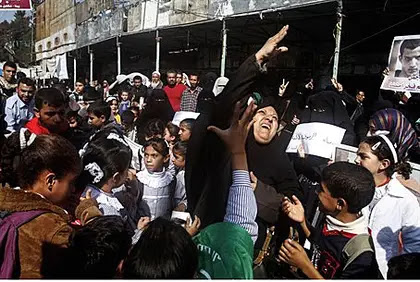 The families of cousins Uday and Rassan Abu Jamal in Jerusalem's Jabel Mukabar celebrated wildly on Tuesday, after learning that the two had murdered four Jews and wounded eight others with hatchets, knives and guns in a synagogue in the Har Nof neighborhood.

"We responded with shouts of joy when we received the news about their deaths," Ala'a Abu Jamal said of his cousins to Yedioth Aharonoth. "People here distributed candies to guests who visited us, and there was joy for the martyrs."

Trying to justify the horrific attack using the situation on the Temple Mount, where Jews are forbidden from praying and Muslim visitors riot on a near daily basis, he continued by calling the attack "a normal thing that can be expected from every man who has courage and a feeling of belonging to his people and to Islam."

"The attack was a surprise for us, we didn't expect that it would occur," claimed Ala'a Abu Jamal. "The two killed (terrorists - ed.) were regular workers and weren't associated with any organization. One of them was married with three children. Thank Allah, someone who dies as a martyr, that's a great thing."

Despite his claims the two were not affiliated to any group, the Popular Front for the Liberation of Palestine (PFLP) terrorist group claimed responsibility for the attack, which was also praised by Hamas, Islamic Jihad and Fatah.

Regarding the wife of the terrorist, Interior Minister Gilad Erdan (Likud) announced Tuesday he would immediately act to cancel her permits to be in Jerusalem. The woman, a resident of the Judea and Samaria region, was allowed in as the spouse of an Israeli resident. Prime Minister Binyamin Netanyahu also ordered for the homes of the terrorists to be demolished.

Another resident of Jabel Mukabar told the Hebrew-language site "we are proud of the two martyrs who carried out the attack. ...We have many more youths who have nothing to lose. They are ready to attack Jews, everything for Al-Aqsa Mosque."

The families of the terrorists did not have too long to celebrate with guests however, as Palestinian Arab Ma'an News Agency reports police detained 12 of the relatives. Brief clashes between police and local residents ensued.

Likewise, the site reported that police sealed off the entrance to the neighborhood with cement blocks, in a similar move to that which was recently done to Issawiya following constant violent riots and terror attacks.

Regarding the families of the terrorists, Deputy Minister for Religious Affairs Eli Ben-Dahan (Jewish Home) on Tuesday said that they should be expelled, "even this very day."

The two terrorists held Israeli residency and the privileges entailed by it, and reportedly one of them worked in a grocery store next to the synagogue they attacked.
Posted by Steve Lieblich at 5:20 am