...Mandela voiced his vehement opposition to Israel's control of the territories it had “occupied” in the Six Day War, and he urged it to concede land to the Palestinians and Syrians, just as it had done with the Egyptians, for the sake of peace.

“My view is that talk of peace remains hollow if Israel continues to occupy Arab lands,” he said. “I understand completely well why Israel occupies these lands. There was a war. But if there is going to be peace, there must be complete withdrawal from all of these areas.”

He did, however, acknowledge Israel¹s legitimate security concerns, declaring: “I cannot conceive of Israel withdrawing if Arab states do not recognize Israel within secure borders.”
One of Mandela's greatest strengths was his ability to bury but not forget ­ the bitterness of the past, and actively work for a fairer future.
He did so when, upon his release from 27 years in jail, he emerged without exhibiting any signs of anger, reconciling with president F.W. de Klerk (earning them both Nobel peace prizes) and even sipping tea with Betsie Verwoerd, the 94-year-old widow of apartheid's architect, Dr. Hendrik Verwoerd.
He did so when he became president of the new democratic South Africa in 1994 and set up the Truth and Reconciliation Commission, pitting perpetrators of apartheid crimes against its victims and their families.
He did so when he went to watch the Springbok team beat the All Blacks in the Rugby World Cup in 1995, depicted in the Clint Eastwood film, Invictus.
And he did so when, at the age of 81, he paid what was termed “a private visit” to Israel for two days after completing his five-year term as president and handing over the reins to his deputy, Thabo Mbeki, in June, and choosing to fly first to Iran, Syria and Jordan.
The peace overtures of then-prime minister Ehud Barak had paved the way for Mandela ­- a devout Christian ­- to make his first and only pilgrimage to the Holy Land. After taking a jab at the Jewish state for being the only nation not to invite him when he was appointed president, and then refusing several invitations to travel here, this trip was aimed at burying the hatchet­ or, in his words, “to heal old wounds” both with Israel and South African Jews.
Mandela had an ambivalent, almost love-hate relationship with Jews and Israel. Like Mohandas (Mahatma) Gandhi before him, his first job had been with a Jewish law firm in Johannesburg, and some of his closest friends, political advisers and business associates were Jewish. When he needed advice or money, they were the first people he called upon.
Many South African Jews had supported him, but others had openly backed or implicitly endorsed apartheid. One of his close Jewish friends, Arthur Goldreich, provided refuge to Mandela and other ANC leaders at his farm in Rivonia, later made aliya and became a professor at the Bezalel Art School.
On the other hand, Percy Yutar, the chief prosector at the infamous Rivonia treason trial at the end of which Mandela was given a life sentence, was Jewish too. 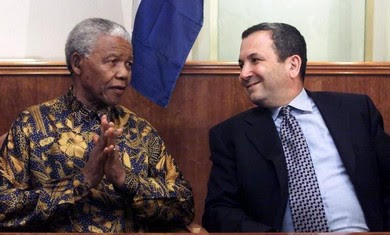 Mandela resented Israel's military relationship with apartheid South Africa, and passionately supported the PLO, which he saw as a liberation movement similar to his own ANC.
He supported Israel's right to exist as a democratic Jewish state, yet felt closer to its enemies: the PLO's Yasser Arafat, Libya's Muammar Gaddafi, Cuba’s Fidel Castro, Iran¹s Mohammed Khatami and Syria's Hafez Assad. ...

...In his talks with Levy at the Foreign Ministry, Mandela shared his impression during his visit to Iran that the country had become more “moderate” under then-president Khatami. He said he had received assurances that the trial of 13 Iranians Jews arrested earlier that year on charges of spying for “the Zionist regime,” which was of great concern then, would be “free and fair.” Levy protested politely against Mandela¹s reading of the situation, telling him that Iran, which backed terrorist groups targeting Jews and the Jewish state, was certainly not giving the 13 Jews a fair hearing. 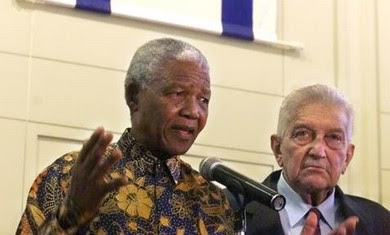 In July 2000, after a closed trial that violated international legal norms, 10 were given harsh sentences, while three others were acquitted. Levy had been right, Mandela wrong.
Following his visit to Israel, Mandela flew to Gaza, where he enthusiastically embraced Arafat and endorsed Palestinian statehood, but made a point of urging Arab acceptance of Israel.
...While he supported Zionism in principle, he believed that if there was to be peace in the Middle East, Israel must negotiate a two-state solution with the Palestinians and avoid becoming a binational “apartheid state” ­ or risk becoming an international pariah like apartheid South Africa.
A humble hero, Mandela was the first to acknowledge that he wasn't always right, but as an advocate of justice for all, he was always ready to stand up and fight for what he believed was right, even when his views were not popular....
Posted by Steve Lieblich at 12:10 pm