Dozens of members of terrorist groups affiliated with the Muslim Brotherhood have left the Gaza Strip headed to the Sinai Peninsula to fight the Egyptian army...
The terrorists are taking part in the Muslim Brotherhood's struggle against the ouster of President Mohamed Morsi. They had been taken part in battles in El-Arish over the weekend and attacked several Egyptian army posts.
The Egyptian army has accelerated efforts to seal smuggling tunnels connecting Gaza and Sinai with 50 tunnels already closed. Nevertheless, a large portion of the tunnels remains active. Last Saturday, a senior Egyptian official held the Islamic Jihad and members of Hamas accountable for inflaming the situation in Sinai.
The official told the London-based Al-Hayat newspaper that Egyptian authorities have observed the entry of 150 Izz al-Din al-Qassam operatives into Sinai via the tunnels. "They were wearing uniforms associated with the military police before joining Jihadists in Sinai," he said.
The official added that the army suspects that Palestinians took part in assaults on army posts last Friday. 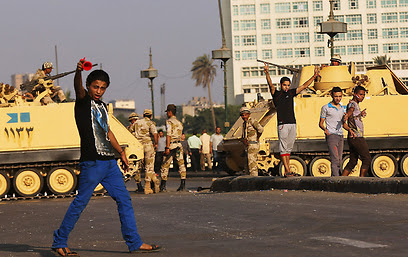 In addition, Egyptian security sources told the Al-Masry Al-Youm newspaper that Muslim Brotherhood officials are overseeing terrorist activity against army and police forces in Sinai and coordinating these efforts with commanders in Hamas' military wing....

Posted by Steve Lieblich at 7:55 am