Syria's main armed opposition group, the Free Syrian Army (FSA), is losing fighters and capabilities to Jabhat al-Nusra, an Islamist organisation with links to al-Qaida that is emerging as the best-equipped, financed and motivated force fighting Bashar al-Assad's regime. 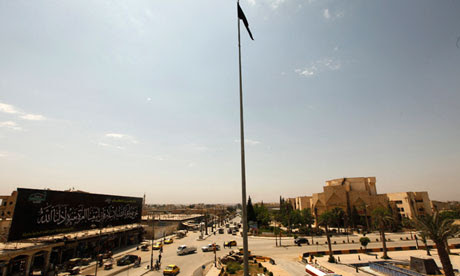 The flag of the Islamist rebel group Jabhat al-Nusra flying over the main square of the city of Raqqa in Syria. Photograph: Reuters

Evidence of the growing strength of al-Nusra, gathered from Guardian interviews with FSA commanders across Syria, underlines the dilemma for the US, Britain and other governments as they ponder the question of arming anti-Assad rebels.
John Kerry, the US secretary of state, said that if negotiations went ahead between the Syrian government and the opposition – as the US and Russia proposed on Tuesday – "then hopefully [arming the Syrian rebels] would not be necessary".
The agreement between Washington and Moscow creates a problem for the UK and France, which have proposed lifting or amending the EU arms embargo on Syria to help anti-Assad forces. The Foreign Office welcomed the agreement as a "potential step forward" but insisted: "Assad and his close associates have lost all legitimacy. They have no place in the future of Syria." Opposition leaders were sceptical about prospects for talks if Assad remained in power.
Illustrating their plight, FSA commanders say that entire units have gone over to al-Nusra while others have lost a quarter or more of their strength to them recently.
"Fighters feel proud to join al-Nusra because that means power and influence," said Abu Ahmed, a former teacher from Deir Hafer who now commands an FSA brigade in the countryside near Aleppo. "Al-Nusra fighters rarely withdraw for shortage of ammunition or fighters and they leave their target only after liberating it," he added. "They compete to carry out martyrdom [suicide] operations."
Abu Ahmed and others say the FSA has lost fighters to al-Nusra in Aleppo, Hama, Idlib and Deir al-Zor and the Damascus region. Ala'a al-Basha, commander of the Sayyida Aisha brigade, warned the FSA chief of staff, General Salim Idriss, about the issue last month. Basha said 3,000 FSA men have joined al-Nusra in the last few months, mainly because of a lack of weapons and ammunition. FSA fighters in the Banias area were threatening to leave because they did not have the firepower to stop the massacre in Bayda, he said.
The FSA's Ahrar al-Shimal brigade joined al-Nusra en masse while the Sufiyan al-Thawri brigade in Idlib lost 65 of its fighters to al-Nusra a few months ago for lack of weapons. According to one estimate the FSA has lost a quarter of all its fighters.
Al-Nusra has members serving undercover with FSA units so they can spot potential recruits, according to Abu Hassan of the FSA's al-Tawhid Lions brigade.
Ideology is another powerful factor. "Fighters are heading to al-Nusra because of its Islamic doctrine, sincerity, good funding and advanced weapons," said Abu Islam of the FSA's al-Tawhid brigade in Aleppo. "My colleague who was fighting with the FSA's Ahrar Suriya asked me: 'I'm fighting with Ahrar Suriya brigade, but I want to know if I get killed in a battle, am I going to be considered as a martyr or not?' It did not take him long to quit FSA and join al-Nusra. He asked for a sniper rifle and got one immediately."
FSA commanders say they have suffered from the sporadic nature of arms supplies. FSA fighter Adham al-Bazi told the Guardian from Hama: "Our main problem is that what we get from abroad is like a tap. Sometimes it's turned on, which means weapons are coming and we are advancing, then, all of a sudden, the tap dries up, and we stop fighting or even pull out of our positions."
The US, which has outlawed al-Nusra as a terrorist group, has hesitated to arm the FSA, while the western and Gulf-backed Syrian Opposition Coalition has tried to assuage concerns by promising strict control over weapons...
Syria's government has capitalised successfully on US and European divisions over the weapons embargo by emphasising the "jihadi narrative" – as it has since the start of largely peaceful protests in March 2011. Assad himself claimed in a recent interview: "There is no FSA, only al-Qaida." Syrian state media has played up the recent pledge of loyalty by Jabhat al-Nusra to al-Qaida in Iraq.
...Jabhat al-Nusra is winning support in Deir al-Zor, according to Abu Hudaifa, another FSA defector. "They are protecting people and helping them financially. Al-Nusra is in control of most of the oil wells in the city." The Jabhat al-Nusra media, with songs about jihad and martyrdom, is extremely influential.
Abu Zeid used to command the FSA's Syria Mujahideen brigade in the Damascus region and led all its 420 fighters to al-Nusra. "Since we joined I and my men are getting everything we need to keep us fighting to liberate Syria and to cover our families' expenses, though fighting with al-Nusra is governed by very strict rules issued by the operations command or foreign fighters," he said. "There is no freedom at all but you do get everything you want." ...
Posted by Steve Lieblich at 8:26 am