...we saw last month at the annual conference of the Institute for National Security Studies (INSS) in Tel Aviv, where the bizarre notion of “constructive unilateralism” was aggressively touted, [that] there are a small number of extremely vocal left-wing Jews, with easy access to the media, who believe in relinquishing virtually the entire West Bank – even if this does not result in peace. Now there is irrational obsession for you.... 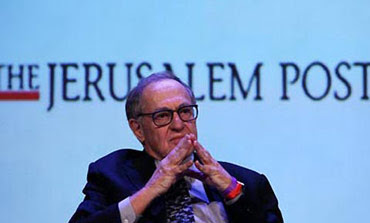 [For example, Alan] Dershowitz suggests a scheme for reengaging the Palestinian Authority (presumably sans Hamas) in negotiations, in effect by offering it less – i.e. a conditional construction freeze – than what has already proven ineffective – i.e. an unconditional construction freeze.
Essentially, he counsels... “The first issue on the table should be the rough borders of a Palestinian state.”
According to Dershowitz this can be done by “recognizing that the West Bank can be realistically divided into three effective areas:
As for the mechanism of the construction freeze, he stipulates: “There would be no Israeli building in those areas likely to become part of a Palestinian state. There would be no limit on Israeli building within areas likely to remain part of Israel. And the conditional freeze would continue in disputed areas until it was decided which will remain part of Israel and which will become part of the new Palestinian state.”
Significantly, the said freeze would commence “as soon as the Palestinian Authority sits down at the bargaining table, and continue as long as the talks continue in good faith.”
...with regard to his confident assertion that certain area across the Green Line are “relatively certain to remain part of Israel,” would this, in Dershowitz’s eyes, include the contentions E1 area whose development has been endorsed by virtually all Israeli prime ministers, including Yitzhak Rabin, Ehud Barak and Ehud Olmert? If not, why not? After all, it is immediately adjacent to Jerusalem and comprises the territorial link between the capital and Ma’aleh Adumim, which Dershowitz designates as “relatively certain to remain part of Israel.”
Or does he recommend encapsulating Ma’aleh Adumim’s 50,000 Jewish residents within an isolated enclave almost completely surrounded by Palestinian territory, accessible only by a narrow, virtually indefensible – or at least easily disrupted – corridor? Would he envision the same fate for “other areas close to the center of Jerusalem” such as Pisgat Ze’ev and and Givat Ze’ev, with a combined population of about 70,000 Jewish residents? Clarification would be greatly appreciated, as well as any indication of who in the PA agrees these areas should remain part of Israel?
As for the areas that “are in reasonable dispute,” would the freeze be placed on both sides of the dispute, or merely on the Jewish side? ...
Clearly, if Jewish development is denied while Arab construction is allowed, the fate of these areas has been prejudged as being destined for inclusion in the putative Palestinian state, and their designation as “disputed” is deceptively misleading. So I would call on Dershowitz to enlighten us on this matter as well – a freeze on both sides, or only for Israelis?
Dershowitz seems to expose his prejudice on this issue when he endorses “encourage[ing] residents [in these areas] to move to areas that will remain part of Israel, especially if the freeze were accompanied by financial inducements to relocate.”
...Apparently Dershowitz sees no moral defects in providing financial inducements to fund the evacuation of Jews from disputed areas to allow their annexation to what, in all likelihood, will become a failed micromini- Islamist state and a forward base for radical terror groups. Accordingly, would he not agree that there is no moral defect in funding the evacuation of Arabs from these areas to allow their annexation to Israel, and to forestall the establishment of such a presumably undesirable entity? And if not, why not?
...according to Dershowitz, the building freeze in the areas in “reasonable dispute” will continue “as long as the talks continue in good faith.”
...What would be the criteria for determining – and who would be the arbiter to determine – whether the talks were “continuing in good faith”? Obama? The State Department? The EU? Egypt? The Arab League? I am sure that, on reflection, Dershowitz might admit that this could be a touch problematic, with Israel risking being locked into a perpetual construction freeze by a biased adjudicator of Palestinian “good faith.”
Or would Israel be able to decide this unilaterally and revoke the freeze at will, whenever disagreement arose? If so, why would the Palestinians agree to an arrangement which gives Israel the power to judge their good faith? Prof. Dershowitz, could you elucidate?
Dershowitz talks glibly of widespread support among Israeli leaders for “a two-state solution that does not compromise Israel’s security.”
For a myriad of reasons that I and others have detailed elsewhere, this is unattainable “pie in the sky.”
I would challenge him (and indeed any senior Israeli) to show how any two-state configuration, even remotely acceptable to the Palestinians as a permanent resolution of the conflict, could be implemented without gravely compromising Israel’s security.
Unless, of course, wildly optimistic, and hence irresponsible, assumptions as to the future conduct of the Palestinians are made, envisioning them behaving in a manner diametrically opposed to the way they have behaved for decades.
In his writings, Dershowitz has shown himself to be alive to perils any such arrangement might create, threatening to bring the realities of Sderot to the Coastal Plain: “Someday Hamas might gain control over the Palestinian government, either by means of a coup, or an election, or some such combination of both. Israel cannot be asked to accept a fully militarized Hamas state on its vulnerable borders.”
The question is why risk a policy that may well precipitate an unacceptable situation which you will have no power to prevent? ...
Posted by Steve Lieblich at 9:09 am