In the midst of the Arab Spring, the PA mocks democracy - Baroness Ashton is speechless

From an article published 2 Sept 2011, by Emanuele Ottolenghi*:
Baroness Catherine Ashton, the European Union's high representative for foreign affairs, is not afraid to speak out. In August alone, she issued no fewer than 36 statements and speeches on a wide range of foreign policy issues; in July it was 56.

Ashton
...But on August 22, the Palestinian Authority postponed local elections indefinitely, and Ashton had nothing to say.
The last time Palestinians voted freely was in January 2006. Given that their president is supposed to serve a four-year mandate, which expired in January 2009 without new elections; that the Palestinian parliament is similarly supposed to serve a four-year mandate, which expired in January 2010, again, without new elections; and that local councils were similarly elected for a four-year term between January and December 2005 - no Palestinian institution currently enjoys any democratic legitimacy.
Ashton was in Ramallah this week and had a wonderful opportunity to remind the PA that democratic legitimacy requires holding, not postponing, elections. After all, it is hard to fathom how expired terms and electoral delays square well with the Europeans' declared commitment to a democratic Palestinian state.
Yet, she uttered not a word about the fact that the [Palestinian] authority, a tireless recipient of Europe's financial largesse, is yet again shunning its duty to build and sustain democratic institutions.
Middle East peace remains Europe's top priority, and it is a European axiom that Israeli settlements stand in the way of that vision. Ashton thus expressed "profound disappointment" at the Israeli government's announcement last month that it would permit the building of 900 new housing units in East Jerusalem. In the following weeks, she expressed deep regret over the same state of affairs, noting that "This is the third time since the beginning of August that the Israeli government has approved settlement expansion in the West Bank, including in East Jerusalem."
The Israeli government made three announcements beforehand - and Ashton, her eye on the ball, responded with three pointed and timely statements to publicly register the EU's public disapproval of Israel's conduct.
Her timely loquaciousness, then, has one exception: when it requires Europe to criticize the Palestinians.
Baroness Ashton began her journey as EU high representative when she spoke at the headquarters of the Arab League in Cairo, on March 15, 2010 - barely nine months before the Arab Spring began. 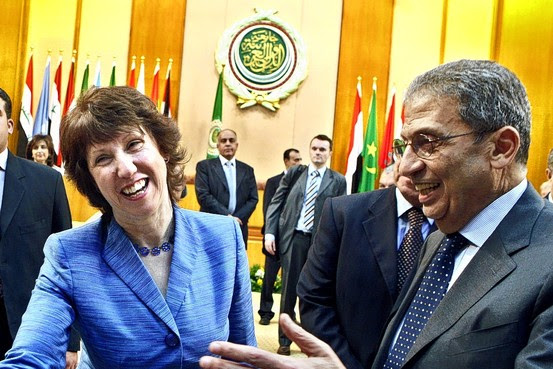 Ashton playing nice with her friends in the Arab League
(Associated Press)
Addressing an audience of autocrats, Ashton never spoke of democracy in the Arab world. She only mentioned the word "freedom" once - with regard to Palestinian freedom from Israeli occupation, not human freedom from repression, a topic that, no doubt, would have resonated with ordinary Arabs, but might have infuriated her hosts.
Eighteen months and several Arab revolutions later, Europe's top diplomat is waxing lyrical about democracy in the Arab world, as if she, or Europe, had always championed it. Yet, the basic tenets of her first flawed speech, designed to ingratiate Europe to Arab dictators, did not change. Israel building a few hundred more houses in the West Bank is a threat to peace, which solicits disappointment, concern and regret. But this is not the case when, in the midst of the Arab Spring, the PA makes once more a mockery of democracy. Ashton might have expressed disappointment, concern or regret at this development.
Instead, the consolidation of another corrupt and autocratic Arab regime in the West Bank does not even merit a gentle nudge.
Follow this link to see previous JIW postings on Ashton.
*Emanuele Ottolenghi is a senior fellow at the Foundation for Defense of Democracies and the author of "The Pasdaran: Inside Iran's Islamic Revolutionary Guards' Corps," to be published by FDD Press this month.
Posted by Steve Lieblich at 11:38 am