...A woman of about 60 was killed and dozens of people were wounded Wednesday afternoon after an explosive device was detonated in a phone booth near the Jerusalem Convention Center.


Medical officials 39 people were hurt in the blast, including three who were seriously hurt. Five other victims were moderately wounded and the rest sustained light injuries. Most victims are young, aged 15-30, said Shaare Zedek Medical Center Deputy Director, Ovadia Shemesh... 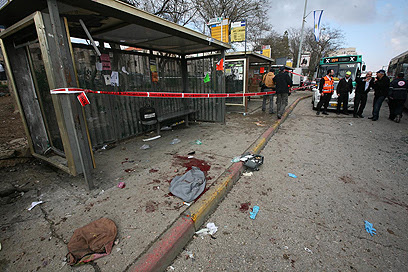 Bomb explodes at bus stop (Photo: Gil Yohanan)
Police say the explosion was caused by a device placed at a telephone booth near a bus stop. Police officers were searching for additional devices while trying to clear residents from the scene, shouting that it could still be dangerous...

Magen David Adom rescue forces declared a mass casualty event and ambulances rushed to the scene after a loud exposion shook the area around 3 pm.

"There was no previous intelligence information. The Jerusalem District police are always ready for these types of events, but there was no specific warning," he said.

Jerusalem Mayor Nir Barkat said one of the wounded called the police to inform them of a suspicious package at the site of the blast, and then the explosion occurred.

He added that no intelligence warnings were received before the attack.

Bus hit by bomb (Photo: Gil Yohanan)
Interior Minister Eli Yishai, who visited the scene of the attack, said retaliation was called for. "The series of incidents from Itamar and until today without a doubt requires us to consider anti-terror operations. It will not be possible to refrain from launching an operation… No concrete decision has been made but we will weigh different options," he said.

Magen David Adom ambulance service director Eli Bin said the victims had been standing at the bus stop or nearby when the device exploded.

One attack victim, 29-year old Yair Zimerman, arrived at Shaare Zedek Hospital for tests and shared details of the blast with reporters.


"I was on bus route 75. The bus stopped at the station and there was a very loud blast. I told the driver to drive forward a little, because something had exploded. I am an MDA volunteer and immediately called the paramedics and told them," he said  "I began treating people. There was one who couldn't be treated on the scene and another two in severe condition." Zimerman said. 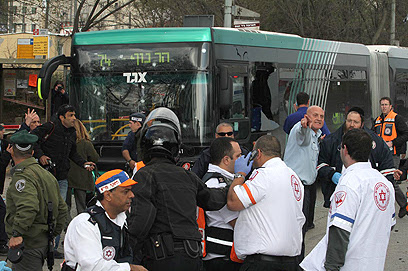 Rescue forces at scene (Photo: Gil Yohanan)
Shlomo Steiner, who works at the Jerusalem central bus station, witnessed the explosion and told Ynet about the images he saw

"I heard a loud blast. I looked out the window and saw smoke rising up, and a yeshiva student running around with his legs on fire. People were trying to help him put out the fire." he said. "I saw people lying on the ground and then rescue forces started pouring in. They were at the scene within a few minutes, evacuating victims…it was all very scary."

Yonatan Shakiba drove by the scene of the attack as the blast shook the area.


"I left the car and saw a boy running towards me with shrapnel wounds all over his body. He was injured in his arms and legs. He sat down on the ground and then laid down. An ultra-Orthodox woman who was there helped him, and then a guy came over with a tourniquet," he said "It was chaos…I looked around and saw many victims and a lot of blood. Rescue forces were all over the area, searching, opening and closing doors. It takes us back to trying times," he said.

The Islamic Jihad also lauded the bombing ...
Posted by Steve Lieblich at 9:03 am

Email ThisBlogThis!Share to TwitterShare to FacebookShare to Pinterest
Labels: Terrorism