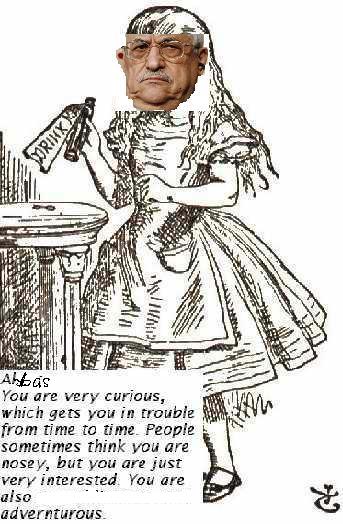 Obama, after the "pragmatic" Palestinians have repudiated any idea of "historic compromise," [and] any recognition of Jewish national sovereignty:


"…so far the talks are moving forward in a constructive way…"

You couldn’t make this stuff up!

...It has been an almost inconceivable spectacle, beginning with the Israeli prime minister traveling to Washington to express his resolve and commitment to implement a policy that he has repeatedly repudiated – and ridiculed - for over a decade and a half.

Yet the absurdity does not end here. In the Alice-in-Wonderland world of Middle East politics things get "curiouser and curiouser."

No less astounding than Netanyahu's acquiescence to discuss the implementation of the very policy he correctly predicted would fail, is the identity of the "partner" with whom he assented to do so.

The Palestinian negotiation team is led by Mahmoud Abbas, someone who has neither the formal legality (since his terms of office has expired) nor the political legitimacy (since his authority in not recognized by a sizeable segment of the electorate) to do so.

And then enter Hamas. With an impeccable sense of timing, Abbas' radical adversaries carried out two brutal terror attacks on Israelis, dramatically demonstrating that the man Netanyahu has incongruously deemed “my-partner-in-peace” cannot control events in the areas he purports to administer- underscoring both the impotence of the Palestinian "partner" and pointlessness of negotiating with him.

...what would be the value of an agreement... if there is no guarantee that the Palestinian signatories will be any position to honor or enforce them, even assuming they desire to do so?

Abbas wants to shape Israel
And just to drive home the absurdity and futility of the entire exercise, after explicitly rejecting Netanyahu's call for a "historic compromise," Abbas pronounced categorically that


"we won't recognize Israel as a Jewish state," as to do so would "block any chance of Palestinian refugees from returning to their original homes inside Israel."

This was reiterated the very next day by senior Palestinian negotiator Nabil Shaath... ...by obdurately insisting on the "right of return," they make it quite clear that the only agreement acceptable to them is one that would [destroy Israel].

...Indeed, Abbas' demands are not restricted to shaping the future state of Palestine...[as] Judenrein with all the Jewish "settlements" evacuated and all the Jewish settlers expelled...

His demands extend to shaping the character of the State of Israel and to what the composition of its population should be ...millions of non-Jewish Palestinian "refugees..." from third-party countries ....

Like I said: You couldn’t make this stuff up!

...And if anyone thought that matter could not get any more farcical ...Obama issued his latest exhortation for Netanyahu to make another gesture and extend the soon-to-expire building freeze. His reasoning: After the "pragmatic" Palestinians have repudiated any idea of making an "historic compromise" and any recognition of Jewish national sovereignty 60 years after Israel's establishment, was:

You couldn't make this stuff up! Or have I said that before?
Posted by Steve Lieblich at 4:27 pm

Email ThisBlogThis!Share to TwitterShare to FacebookShare to Pinterest
Labels: humour