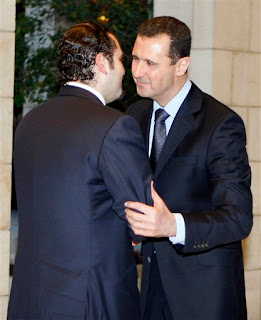 Syrian Dictator Bashar Assad, right, meets with Lebanon's Prime Minister Saad Hariri, in Damascus, Saturday, Dec. 19, 2009 .
DAMASCUS, Syria — Lebanon's prime minister, who has blamed neighboring Syria for the assassination of his father, visited Damascus Saturday for the first time since the 2005 killing — a trip that a close associate said was extremely difficult for him to make.

Despite the unresolved issue of his father's slaying in a massive truck bombing in Beirut, Lebanese Premier Saad Hariri's visit potentially opens the way for a new era in the two countries' relations, which have been characterized by upheaval and suspicion for decades.

The 39-year-old Hariri has appealed for relations with Syria based on "clarity and honesty." He was greeted warmly by Syrian President Bashar Assad upon his arrival at the presidential palace at the start of his two-day visit, and Lebanese media said he would attend a dinner banquet hosted by Assad.

Assad adviser Buthaina Shaaban told reporters their talks were "frank" and "succeeded in overcoming difficulties that marred relations in the past five years."

"The guarantee to that is the will of both President Assad and Hariri to build a positive and constructive relationship," she said.

Hariri said in a statement his government was looking forward to establishing "real and strategic relations with Syria."

Syria directly dominated Lebanon for nearly 30 years and kept tens of thousands of troops on its soil. After the killing of Hariri's father, Rafik, Syria came under intense pressure from its opponents in Lebanon, who staged massive protests, and from the West, forcing it to withdraw its troops from Lebanon.

Syria repeatedly denied involvement in the assassination and a series of other political slayings and bombings that followed, but Hariri and his supporters continued to implicate Syria in the killing. Anti-Syrian parties were swept to power in 2005 elections in Lebanon.

The visit by Hariri was "very difficult on the personal level" and involves "great sacrifice," said Hariri loyalist and former lawmaker Mustafa Alloush.

"But as prime minister of Lebanon, it is quite normal to have such a visit. ... It is necessary and there is a need to settle all aspects of the relationship," Alloush told The Associated Press.

He said the visit did not mean some in Lebanon had dropped their belief that Syria was responsible for the killing of Rafik Hariri, who also served as prime minister.

"But this matter is up to the international tribunal now; it is no longer a personal issue," Alloush said.

A U.N.-backed tribunal has been set up to prosecute the assassins, but no suspects have been charged.

Syria has sought recently to improve its relations with the West, largely through its actions in Lebanon. Assad backed a peace deal between rival political factions in Lebanon that ended sectarian violence in May 2008.

Last year, Syria established formal diplomatic relations with Lebanon and set up an embassy in Lebanon for the first time since the countries' independence from France in the 1940s.

Syria still maintains influence in Lebanon through its backing of the militant group Hezbollah.

Hariri and his pro-Western political allies are in an uneasy power-sharing government with a Hezbollah-led grouping.
Posted by Steve Lieblich at 7:46 pm