The (US) Seventy-first came to Gunskirchen...

This is of personal significance, because my father Israel Lieblich (Yisrael ben Zvy, z"l) was marched to the horrific Gunskirchen forest camp in North Austria from the Gusen II camp, 50km north east, in the last days of the war, probably arriving on 16th, 18th or 24th of April 1945.

The camp was liberated on 4 May 1945 by the 71st Infantry of the US army, including Ken Hoffman, a member of John Mooney's family. The descriptions you will read of the inmates of the camp could be describing my father at that time.

From the family web site of John Mooney, of Brunswick, Maine, USA: 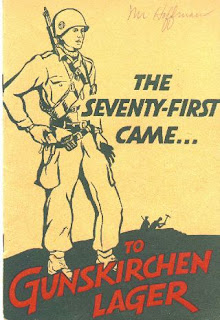 When my maternal grand-mother passed away, I came into possession of a small pamphlet owned by her second husband's (my step-grandfather) brother. His name was Ken Hoffman and he was a member of the 71st infantry during World War II.

I decided to make placing this material on the web a small personal project of mine and this site is the end result. I have reproduced here all the narrative text and all the black and white photos that appeared in the book. You should be warned that this material very accurately reflects the grisly details of the Army's initial arrival at the camp. I was also motivated to produce this site since the pamphlet, while stored for decades in my family's belongings, is still showing signs of age and becoming somewhat tattered.

The book is divided into 4 sections, with personal accounts by separate members of the liberating division....

For further background about the Gunskirchen concentration camp see this section of the Gusen memorial Committee web site.

Posted by Steve Lieblich at 8:38 pm