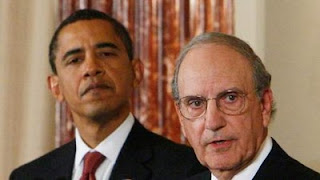 Barack Obama with George Mitchell, his Special Envoy for the Middle East.


Obama's appointment of the former U.S. Senate leader as "Special Envoy for the Middle East" has met with good reviews ... But not [from] me.

First, how can one hold in high regard someone who came out with the wretched Sharm El-Sheikh Fact-Finding Committee Report also known as the "Mitchell Report," of April 2001? I did an analysis of it when it appeared at "Mitchell report missed it." I called it "a great disappointment."

A couple of excerpts:

I found that Mitchell and his committee were "myopically unaware of the real issue at hand, which is not violence, or Jewish settlements, or Jerusalem. It is, rather, the enduring Arab reluctance to accept the existence of a sovereign Jewish state." I suggested that, the real solution "lies not in getting the parties back as fast as possible to diplomacy, but in instilling in the Palestinians an awareness of the futility of their use of violence against the Jewish state."

Albert Einstein defined insanity as "doing the same thing over and over again and expecting different results." Could someone explain to me how that definition does not apply to this fifteenth effort? Does anyone wish to wager on its chances for success?

Steve Lieblich said...
This comment has been removed by the author.
11:37 am

Even "...an awareness of the futility of [Palestinian] violence against the Jewish state" is just a staring point.

The Arabs must then dismantle a decades-long campaign of vilification and incitment to hatred and violence, starting with their education system. Just as they invested decades to inculcate the hatred and the terrorism, it will require decades more to undo the damage.