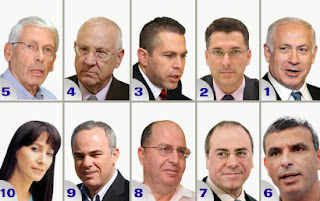 Accounting for party chairman, Benjamin Netanyahu [1], the big winner of the evening is MK Gideon Saar [2].

Moshe Feiglin, whose ascent is greatly feared by Netanyahu, reportedly reached the 20th spot....
Posted by Steve Lieblich at 2:43 pm

Email ThisBlogThis!Share to TwitterShare to FacebookShare to Pinterest
Labels: Israel