From ABC News, by Peter Lewis: 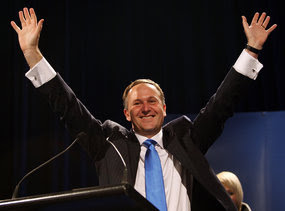 Prime minister-elect John Key has pledged a more prosperous and more ambitious New Zealand. (Getty Images: Hannah Johnston)
New Zealanders have voted for change in Saturday's general election sweeping aside the three-term [anti-Israel, anti-US] government of Labour Prime Minister Helen Clark in favour of a new conservative coalition led by the National Party.
The swing to the right, that was forecast in all the pre-election polling, was apparent as soon as counting got underway. The centre right National Party, led by John Key, finished with 45 per cent of the vote compared with Labour's 33 per cent.
...Prime minister-elect John Key pledged a more ambitious future for the country during his acceptance speech in Auckland. "In their hundreds and thousands across the country they have voted for change," he said. "Today, New Zealanders have voted for action, for a safer, more prosperous and more ambitious New Zealand."
Posted by Steve Lieblich at 11:22 pm