Three Israelis are dead and 46 others were injured when an East Jerusalem Palestinian man purposely plowed his tractor into a crowd of pedestrians and overturned two busses in downtown Jerusalem. 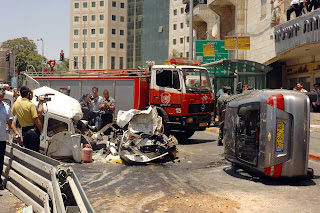 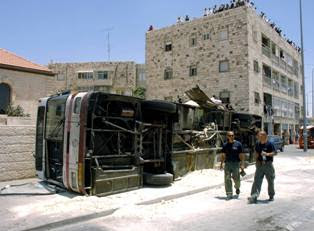 The driver was working with a company constructing Jerusalem’s light rail system. Many of the wounded were on the number 13 Egged bus that the tractor turned over. The terrorist was shot dead in order to force the tractor to a stop and prevent further casualties.

....The attack, at the junction of Jaffa Road and Sarei Yisrael St., set off a panic in the area and left a large swath of damage in the heart of the capital. Traffic was halted, and hundreds of people fled through the streets in panic as medics treated the wounded.

A car was dragged several meters by the bulldozer before being crushed under the vehicle. The parents of a baby being treated in Sha'arei Tzedek Hospital have yet to be tracked down, and it is believed that the baby was thrown out of the car by one of his parents before the vehicle was crushed.

A policewoman was first to react, firing at the bulldozer and apparently hitting the terrorist. Another policeman then climbed onto the vehicle and was lightly wounded in a struggle with the attacker.

Finally, an off-duty soldier took a gun from an elite policeman at the scene and shot the terrorist dead. The soldier, Moshe Klessner, 18, is the brother-in-law of IDF officer David Shapira, who killed the terrorist in the Mercaz Harav Yeshiva attack on March 6. Klessner was assisted in neutralizing the attacker by Eli Mizrahi, a member of police's Yasam elite anti-terror unit.

Police said the incident was definitely a terror attack, but stressed that they had no specific warning. Three Palestinian terror groups claimed responsibility for the attack...

Police added that the terrorist, Jabr Duwait, a 30-year-old father of two from Tzur Bahar in southeast Jerusalem, was carrying an Israeli identity card. They said he had a criminal record and was employed by the construction company working on the Jerusalem light rail project. The man drove the bulldozer out of the construction site before perpetrating the attack.

..."I saw the bulldozer smash the car with its shovel. He smashed the guy sitting in the driver's seat," said Yaakov Ashkenazi, an 18-year-old seminary student.
Esther Valencia, a 52-year-old pedestrian said she barely escaped the carnage. "He almost hit me. Someone pushed me out of the way at the last moment. It was a miracle that I got out of there."
Sixteen-year-old Eyal Lang Ben-Hur was in a bus when the driver yelled out, "Get out of the vehicle! Everyone out!" People fled in a panic, he said, and the bus was hit an instant later....
Posted by Steve Lieblich at 10:07 pm