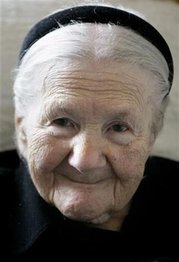 ...Mrs. Sendler, code name "Jolanta," smuggled 2,500 children out of the Warsaw Ghetto during the last three months before its liquidation. She found a home for each child. Each was given a new name and a new identity .....
... Mrs. Sendler listed the name and new identity of every rescued child on thin cigarette papers or tissue paper. She hid the list in glass jars and buried them under an apple tree in her friend's backyard. Her hope was to reunite the children with their families after the war. Indeed, though most of their parents perished in the Warsaw Ghetto or in Treblinka, those children who had surviving relatives were returned to them after the war. Yet Irena Sendler sees herself as anything but a heroine. "I only did what was normal. I could have done more," she says. "This regret will follow me to my death."
Breaking the Silence

Though she received the Yad Vashem medal for the Righteous Among the Nations in 1965, Irena Sendler's story was virtually unknown. But in 1999 the silence was broken by some unlikely candidates: four Protestant high-school girls in rural Kansas....looking for a subject for the Kansas State National History Day competition...
... The girls compiled many details of Mrs. Sendler's life, which they eventually made into a short play, "Life in a Jar." The play has since been performed hundreds of times in the United States, Canada, and Poland, and has been broadcast over radio and television, publicizing the silent heroine to the world.
... Mrs. Sendler was a senior administrator in the Warsaw Social Welfare Department, which was in charge of soup kitchens.... From 1939-1942, she was involved in acquiring forged documents, registering many Jews under Christian names so they could receive these services; she listed them all as typhus and tuberculosis victims, to avoid any investigations.

It wasn't enough. Irena joined the Zegota, the Council for Aid to Jews, organized by the Polish underground resistance, operating out of London with the help of many British Jews. Obtaining a pass from the Warsaw Epidemic Control Department to enter the Warsaw Ghetto, she smuggled in food, medicine, and clothing. Over 450,000 Jews had been forced into the small 16-block area that was the Warsaw Ghetto; 5,000 were dying each month. Irena felt that her efforts were helping only to prolong the suffering, but doing nothing to save lives. She decided that the most that could be done was to try to save the children. "When the war started, all of Poland was drowning in a sea of blood. But most of all, it affected the Jewish nation. And within that nation, it was the children who suffered most. That's why we needed to give our hearts to them," Sendler said on ABC News.
In 1942, Mrs. Sendler, "Jolanta," was put in charge of the Children's Division of Zegota. She and her team of twenty-five organized to smuggle out as many children as possible from the Ghetto. .... Irena, herself a young mother, found it almost impossibly painful to have to persuade parents to part with their children, entrusting them to a non-Jewish stranger. The only thing that gave her strength to withstand this pain was the knowledge that there was no other hope for survival....... Fighting against time, "Jolanta," entered the Ghetto several times a day, wearing on her arm a yellow Star of David to show her solidarity, desperately trying to convince parents to let her take their children..... Small children were sedated to keep them from crying, then hidden inside sacks, boxes, body bags, or coffins. Older children who could pretend to be ill were taken out in ambulances. Many were smuggled through sewers or underground tunnels, or taken through an old courthouse or church next to the Ghetto. Outside the Ghetto walls, the children were given false names and documents. ....
....The Church was actively involved in much of Mrs. Sendler's work. However, she stresses that the goal was not to convert people to Catholicism, but rather to save lives. Each family had to promise to return the children to any surviving family members after the war. Unfortunately, this promise was not always kept. Mrs. Sendler spent years after the war, with the help of her lists, trying to track down missing children and reconnect family members.
Of the remaining orphans, some 400 were taken to Israel with Adolph Berman, a leader in Zegota. Many others chose to stay with their adopted parents. Despite Mrs. Sendler's efforts to trace them, some 400 to 500 children are still missing; presumably they either did not survive or they are living somewhere in Poland or elsewhere, perhaps unaware of their Jewish identity.

For two years, Jolanta's covert operations were successful. Then, in October 20, 1943, the Gestapo caught up with her. She was arrested, imprisoned in Warsaw's notorious Pawiak prison, and tortured. Her feet and legs were broken. She still needs crutches and a wheelchair as a result of those injuries, and still carries the scars of those beatings. She refused to betray any of her co-conspirators or to reveal the whereabouts of any of the children.
Jolanta was sentenced to death by firing squad, a sentence that she accepted with pride. But unbeknown to her, Zegota had bribed one of the German guards, who helped her to escape at the last moment....
...Due to the Communist regime's suppression of history and its anti-Semitism, few Poles were aware of Zegota's work, despite the unveiling of a plaque honoring the organization, in 1995, near the former Warsaw Ghetto. Mrs. Sendler continued her life, simply and quietly, continuing to work as a social worker ... until the discovery by the Kansas teenagers catapulted her into the public arena.
Irena Sendler was awarded the Order of White Eagle, Poland's highest distinction, in Warsaw, in 2003. This year, she was nominated to receive the Nobel Peace Prize. At a special session in Poland's upper house of Parliament, President Lech Kaczynski announced the unanimous resolution to honor Mrs. Sendler for rescuing "the most defenseless victims of the Nazi ideology: the Jewish children." He referred to her as a "great heroine who can be justly named for the Nobel Peace Prize. She deserves great respect from our whole nation."
Today's Warsaw still bears testimony to Mrs. Sendler's lifesaving work. The corner store where children were hidden in the basement and the apple tree where the names of the children where buried still stand, all within sight of the German army barracks. Although the children had known her only as Jolanta, as her story became publicized, she began to receive calls from people who recognized her face from the photos: "I remember your face! You took me out of the Ghetto!"
In an interview earlier in 2007 with ABC News, Mrs. Sendler voiced some of her frustrations about how little anything has changed in the world: "After the Second World War it seemed that humanity understood something, and that nothing like that would happen again," Sendler said. "Humanity has understood nothing. Religious, tribal, national wars continue. The world continues to be in a sea of blood." But she added, "The world can be better, if there's love, tolerance, and humility."
Also see The Irena Sendler Project.
Posted by Steve Lieblich at 3:08 pm