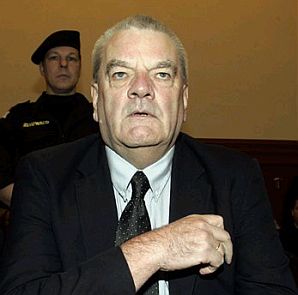 The Austrian judge who ruled in favor of the early release of British Holocaust denier David Irving from jail Wednesday is a supporter of Jorg Haider's rightist Austrian Freedom Party, the Austrian news agency APA reported.

Vienna's highest court ruled Wednesday that Irving, who had been imprisoned on charges of denying the Holocaust, will be released and the remaining two years of his three-year sentence will be served on probation.

In February, another Vienna court sentenced Irving to three years imprisonment under a 1992 law which applies to "whoever denies, grossly plays down, approves or tries to excuse the National Socialist genocide or other National Socialist crimes against humanity in a print publication, in broadcast or other media." The law calls for a prison term of up to 10 years.

... In September, Austria's Supreme Court upheld Irving's conviction. Irving has been in custody since his November 2005 arrest on charges that followed two speeches he gave in Austria in 1989, for which he was accused of denying the Nazis' extermination of six million Jews.

...Efraim Zuroff, director of the Simon Wiesenthal Center's office in Israel, said the court's ruling was the "worst possible response to last week's Holocaust denial conference in Teheran and will only encourage those who support these mad ideas."

"It is unfortunate that a week after the highly publicized conclave of Holocaust deniers in Teheran, the Austrian court saw fit to reduce Irving's sentence to probation, since it may send the inaccurate message that Holocaust deniers can spew their lies about history with impunity," Yad Vashem spokeswoman Iris Rosenberg said.
Posted by Steve Lieblich at 8:36 am