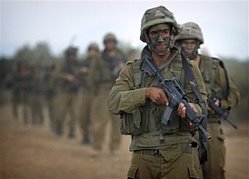 Israeli forces are pressing forward with the wide-scale operation against Hizballah which DEBKAfile reports was launched four days ago on Wednesday, Aug. 8.

The campaign will continue until the ceasefire called for in Security Resolution 1701 approved Friday, Aug. 11, is enforced on the ground – if and when that happens.

It is carried forward by four expanded divisions of 11 brigades, about 12,000 fighting men. Head of the Ground Forces Branch Maj.-Gen Benny Gantz is leading the IDF’s South Lebanon command.

The first stage of the new operation has succeeded in its objective of encircling Hizballah’s 1,500-strong force in a large swathe stretching from the Litani River in the north, to Tyre in the southwest.

This tactic follows Israel’s 1982 Lebanon War stratagem of pushing Palestinian forces out of South Lebanon up to Beirut and then holding them to siege. Now, Israeli troops are pushing Hizballah into the Tyre enclave that also encompasses the Palestinian refugee camps of Rashidiya and Bourj al-Shamali, in order to contain it there. In central and northern Lebanon, Hizballah strength will be left intact with two of its three rocket brigades - medium and long range - for the time being. They will be left to the Air Force to destroy.

In the last few hours, Hizballah’s command and control in the south is showing signs of distress after finding itself cut off from reinforcements and re-supply from the north by the rapid Israeli advances of the last four days....

....this broad IDF campaign is planned to proceed over the weekend and early next week, on the assumption that Washington and the United Nations will step in at some early point and threaten to declare Israel in violation of the ceasefire resolution until it is stopped.
Posted by Steve Lieblich at 1:35 am