Peres: "when you are attacked, you defend yourself" 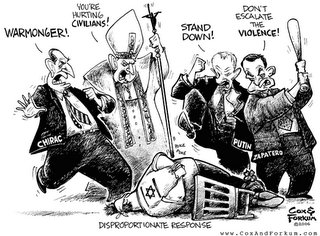 ...."Iran has made a laughing stock of the world community" by supporting Hizbollah guerrillas in Lebanon, Peres told Israel Radio. "Since World War Two, I haven't seen such a situation of international weakness."

He doubted Hizbollah would honor any truce the United States, Europe and United Nations are trying to mediate, and said Israel should continue its attacks until the guerrilla group was disarmed.

"Hizbollah attacked us and we are returning fire even more strongly ... This isn't the first time Israel is being attacked. We must win and stop this attack," Peres said.... "when you are attacked, you defend yourself, there is no need to explain it. This is a completely justified war."

Peres won a Nobel peace prize for mediating a 1993 peace deal with Palestinians, which fell apart when Palestinian-Israeli violence erupted in 2000.

Posted by Steve Lieblich at 5:22 am