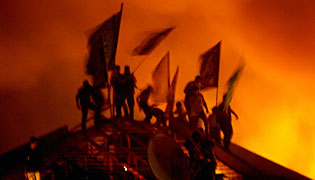 The PA who claimed that the Gaza synagogues symbolized Israel's occupation earlier Sunday boycotted the ceremony marking the handover of the Gaza Strip in what was widely viewed as a protest against the cabinet's decision. Palestinian negotiator Saeb Erekat accused Israel of 'throwing problems' in the Palestinians' faces. 'It's really unfair,' Erekat said."
Posted by Steve Lieblich at 12:37 pm

I have a mlm site/blog. It touches on mlm related stuff.