Hitler would be proud of him 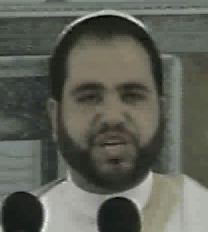 Palestinian Media Watch reports on the Friday sermon by Ibrahim Mudayris broadcast on official Palestinian Authority TV on May 13, 2005:

"...With the establishment of the State of Israel, the entire Muslim nation was lost because Israel is a cancer that spread in the body of the Islamic nation; because the Jews are a virus similar to AIDS, from which the entire world is suffering. This has been proven in history. Read the history! ..."

"...the Jews are the ones who provoked the Nazis so the world would go to war against it. On the day the Jews provoked ... the nations of the world to fight Germany ... the anger of the Germans toward the Jews increased significantly, and what happened, happened ... "

"...We [Muslims] have ruled the world [in the past] and a day will come, by Allah, and we shall rule the world [again]. The day will come and we shall rule America, Britain, we shall rule the entire world, except the Jews. The Jews will not live under our rule agreeably permanently, since they have been treacherous in nature throughout history. A day will come when all shall rest from the Jews, even the tree and the stone, which have suffered from them. Listen to your Beloved [Muhammad], who tells you about the most dire end awaiting the Jews. The tree and the stone want the Muslim to bring every Jew to his end. You all know the Hadith."

"The Hour [Resurrection] will not come until the Muslims make war against the Jews and kill them, and until a Jew hiding behind a rock and tree, and the rock and tree will say: Muslim, servant of Allah, there is a Jew behind me, come and kill him!"

He explains that the fulfillment of the often-preached Hadith means the extermination of every last Jew is Allah's will and is, thus, inevitable.

Follow the link to the Palestinian Media Watch , where you can see a transcript of the speech and video exerpts.
Posted by Steve Lieblich at 4:17 pm