Time for Hamas to lose in the Israel-bashing casino 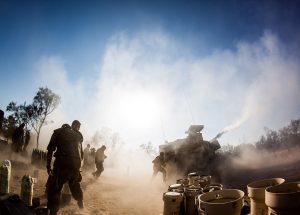 IDF artillery forces fire into the Gaza Strip as part of Operation Protective Edge, 2014
- photo by IDF via Wikimedia Commons

The accumulated deterrence achieved in the three previous rounds of wide-scale fighting between Israel and Hamas in 2008-9, 2012, and 2014 has come to a temporary halt. Israel must start preparing for a massive fourth round – a round in which Israel will, one hopes, replicate the cumulative deterrence it scored against the Arab States in 1973. This would mean subjecting Hamas to a threshold of pain sufficiently unbearable to induce it to stop fighting Israel altogether.

Then, after 2014, “the land became quiet for nearly four years” (in Scriptures, it was usually forty).

Fewer than 80 missiles were launched during that period, most if not all by the wayward Salafi organizations, which is why many of them fell in Gaza itself. There were no casualties and almost no damage from these launchings. The professionals with the real firepower in Gaza – Hamas, the effective ruler of the Strip; and Islamic Jihad – stayed out of the fray.

This relative peace changed dramatically after the initiation of the “March of Return” violence at the end of March 2018.

Why the change? And why is Hamas winning this latest round of violence after having been intimidated for so long?

There’s a clear answer. Hamas was finding it increasingly difficult to stave off pressure from thousands of families whose sons were not released in the 2011 Shalit deal nearly seven years ago. Hamas leaders live in an area where they meet their constituency at every turn, in the refugee camps where many live, in the mosques, and in the universities and colleges. To be clear, their constituency is not the general public, for whom Hamas cares nothing. It is the hard core of 50,000 or so families in Gaza who support Hamas and Islamic Jihad through thick and thin.

The solution to the accumulating pressure was the “March of Return” campaign.

It was members of this constituency who came to the security fence every Friday afternoon (especially late in the afternoon, when the sun, which sets in the west, blurs the vision of the IDF soldiers facing it). It was they, or a few hundred of them, who were willing to put themselves at risk confronting the IDF. Among them were professional Izz al-Din troopers who dashed to, and sometimes through, the fence to destroy any equipment left in the area. They were easily identifiable by their fit physiques, purposefulness, agility, and speed – truly, the “Nukhba” (“elite”), Hamas’s crack troops.

The total number of people who participated in the “march” is 20,000 at the most (and is probably substantially fewer). The figures were subsequently exaggerated by both Hamas and the IDF. Even if accurate, this figure means that 98.5% of the population of Gaza and over 90% of the relevant age cohort (15-35) stayed home.

Worse, the expectation that West Bankers, Arab Jerusalemites, and even Israeli Arabs would do battle with Israeli security forces during the campaign failed miserably. The months that followed were the quietest by far in these areas since 2013, when terrorism picked up once again in the Jerusalem area and other sites in Israel.

Hamas was faced with the question of what to do next. Not only did pressure from the families of the prisoners increase, but others in the hard core wondered why they should be the only Hamas adherents to take any risks, especially since they have been paid only 40% of their salaries since 2014.

The leaders of Hamas took a risky decision – to escalate with missiles, but in a very selective and limited way. It was risky because Hamas not only well remembered 2014 but knew it was facing a new Minister of Defense who talks and acts like Putin and who has vowed in the past to destroy Hamas rule in Gaza.

The move to escalate was a gamble, and Hamas won. The key to its success was its calculation to limit the missiles to the Gaza envelope.

Hamas, who are experts in Israeli politics, calculated that striking the 20,000 Israeli inhabitants who live in the Gaza area is worth less than a seat in the Knesset during an election year. Expanding the strikes to Ashdod, Ashkelon, or Beersheba, mainstays of Likud support, would have forced the Netanyahu government to respond in a massive way. This is why Hamas did not strike wider.

The Israeli government responded just as Hamas hoped it would – with limited, tit-for-tat strikes in which Israeli civilians and military personnel paid a higher and higher price.

This is not acceptable. Israel must start preparing for a massive fourth round. There’s simply no other way.

The alternative is brokering a prisoner deal that will soon be followed by more rounds of limited Hamas violence conducted to achieve other demands – and the list is a long one, from terminating limitations on Gaza fishing (read, enhancing the possibility of arms smuggling from the Syrian coast), or lifting limits on dual-purpose imports such as cement and steel beams (for underground tunnels and missile storage facilities).

Despondent? Don’t be. The good news is that the fourth round may be like the fourth round against the Arab States, the Yom Kippur War. There was no change in the level of hatred of Israel among the Arab states when they made the decision to end war-making against the Jewish State. It was sheer pain that made the Yom Kippur War the last in which the Arab states actively sought war with Israel.

The fourth round with Hamas might generate the same kind of thinking. Its members will no doubt continue to hate the Jews and the Jewish State as much as before, but the pain might prove sufficiently unbearable to induce a change in behavior if not a change of heart.

*Prof. Hillel Frisch is a professor of political studies and Middle East studies at Bar-Ilan University and a senior research associate at the Begin-Sadat Center for Strategic Studies.
Posted by Steve Lieblich at 7:42 am