THE DRUMBEAT OF ALARM GROWS LOUDER FOR BRITISH JEWS Jeremy Corbyn’s refusal to attend next month’s dinner in London to celebrate the centenary of the Balfour Declaration confirms what many have long suspected.

His antipathy to Israel goes way beyond hostility to Israeli “settlements” or any romantic attachment to the Palestinian cause. He does not support the existence of Israel at all.

How else to explain his refusal to attend a dinner to celebrate the event which kick-started the (agonising) process that eventually resulted in the establishment of the State of Israel?

And if he thus opposes the self-determination of the Jewish people in their own ancestral homeland, how can he be anything other than hostile to Judaism itself? For Judaism comprises three inseparable elements: the people, the religion and the land. Judaism is, simply and indivisibly, the mission of the Jewish people to form a nation of priests within the land of Israel.

Of course, neither Corbyn and his hard-left cabal, nor the so-called soft-left whose views about Israel may be less extreme but are no less problematic, have any insight into their own bigotry because they have virtually no understanding of what Judaism means (and that goes for many Jews on the left too, who equally deploy the spurious mantra that anti-Zionism is not antisemitism as their get-out-of-jail-free card).

But hey, some folk are very happy with Corbyn’s Balfour dinner snub; there are reports that the JC story about it has been tweeted by Hamas.

Many British Jews are now shuddering at the possibility of a Corbyn-led Labour government. They are heartbroken and aghast at what has happened to the country that for the half-century following the liberation of Belsen they believed offered them not just physical but psychological safety.

Some, like Angela Epstein in this article, are now talking of emigrating should Corbyn come to power.

She describes how her children’s Jewish schools in Manchester were encircled by fences, CCTV cameras and security guards.

“Elsewhere, every Jewish building now has a guard permanently stationed at the door. In 21st-century Britain — the place of our birth and our home.

“Most Jewish people I know have endured cat-calling as they leave synagogues, schools or other Jewish centres. There have been countless Saturday mornings when, as I walk to synagogue, a car screeches past with the occupants shouting something indeterminate from the window. Friends have had eggs thrown at them.

“My son was subjected to a blistering verbal attack when he recently wore his Jewish skullcap on the London Underground.Little wonder that in a YouGov poll earlier this year for the Campaign Against Antisemitism, almost a third of British Jews said they had considered leaving the country, while one in six said they feel unwelcome here.”

This cultural poison has been swelling for years. The Labour party hasn’t created it but is merely its most visible expression – and as a result is legitimising its further increase. Epstein observes:


“As the Labour Party continues to reveal its toxic underbelly, for many British Jews the question of uprooting our families and leaving Britain is a matter of when, not if… If history has taught us Jews anything, it’s knowing when it’s time to pack.”

Actually, it’s hard to know that. The difficulties and risks of remaining have to outweigh the difficulties and risks of uprooting; and people find themselves at very different points along that sliding scale. But for sure, the drumbeat of alarm among many committed British Jews is growing louder by the day.
Posted by Steve Lieblich at 6:20 pm No comments: Links to this post

Israel’s Image is Improving in Greece 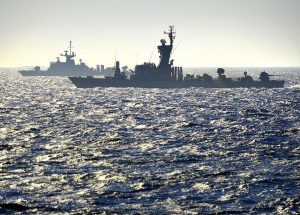 Israel’s image in the Greek media has been negative for decades. However, the rapprochement between Athens and Jerusalem and improvement in their political and economic relations since 2010 have affected Greek journalists. While sympathy for the Palestinians has not completely faded, Israel is no longer represented exclusively as a villain. It is now often portrayed as a useful partner. While anti-Semitism remains a problem in Greece, this new media attitude could lead to its decline over the long term.

Generally speaking, there has long been a consensus among Greek journalists on who is to be blamed for the Israeli-Palestinian conflict and for the failure to achieve peace: Israel. The Jewish state has been consistently portrayed as the aggressor and the Palestinians as innocent victims. The Greek coverage of the Mavi Marmara incident in June 2010 illustrates this phenomenon. “Mourning and ire for the Israeli Ressalto” was the headline used by Eleftherotypia, a leftist publication (now closed down for economic reasons). The center-left paper TA NEA was equally critical, opting for the headline: “World outcry: Goliath crushed David”. The “World outcry” phrase was also used by the conservative newspaper Hi Kathimerini.

Greek sympathy for the Palestinian cause is rooted in the proximity of the Arab world and the support of most Arabs on the Cyprus Question. Anti-Semitism has also played a role. But there is another reason why Israel was constantly blamed by the Greek media, at least before 2010. It served as a useful scapegoat for all the problems in the Middle East, if not all the problems in the world. This made it easy for journalists to avoid time-consuming, in-depth research on international affairs. Jerusalem’s close cooperation with Ankara only fueled the negative perception of Israel among the Greek media.

The turning point came in the late summer of 2010. The media tend to follow the prevailing political agenda, and the rehabilitation of Israel’s image was no exception. When Jerusalem decided to look for new allies in the Eastern Mediterranean following the setback in its relations with Ankara, it turned to Athens. In August 2010, Israeli Prime Minister Benjamin Netanyahu visited Greece, opening a new chapter in a relationship that had been marked for decades by misunderstandings and suspicion.

George Papandreou, the Greek premier at the time, saw Israel as a critical ally in an era of economic austerity and uncertainty over Greece’s potential default and exit from the Eurozone. The Greek media followed Papandreou’s lead. The headline of TA NEA was characteristic: “From flirting to marriage: Greece and Israel are opening perspectives for golden cooperation.” Eleftherotypia talked about “Changing balances creating a ‘new axis’ in the region,” and Hi Kathimerini wrote about a “closer collaboration” between the two countries. From late 2010 onwards, covering Israel has been a job not only for foreign editors but also for diplomatic correspondents.

In the aftermath of the Netanyahu-Papandreou Athens meeting, most Greek journalists began to grasp that Israel is no longer an unknown, distant neighbor. Above all, it is a partner. This strategic partnership yields positives for Greece in terms of security and energy affairs, and also has a tangibly positive effect on the Greek economy. While 207,711 Israeli tourists came to Greece in 2012, expected arrivals from Israel are expected to be 530,712 in 2017. Thessaloniki (among others) is a city Israeli citizens are keen to visit due to its historic Jewish past and its mayor Yannis Boutaris, who is very friendly towards Israel.

Also, economic opportunities quickly became apparent. As a “start-up” nation, Israel attracted the attention of Greek entrepreneurs. The Embassy of Israel in Athens organizes events and competitions, the winners of which have the opportunity to participate in the DLD Tel Aviv Innovation Festival. Israel’s communications strategy on Facebook and Twitter also helps Greek journalists and ordinary citizens gain easy access to information about the country.

Moreover, the racist behavior of the neo-Nazi Golden Dawn party, and its position that Israel is Greece’s “eternal enemy,” have (to an extent) associated anti-Israel voices in Greece with political extremists. The attack of a far-left terror group against the Israeli embassy in Athens in December 2014 reinforced this perception and drove some new sympathy for Israel. At the time, most Greek journalists expressed serious concern about safety and security in Greece as well as about the international implications of the event. To Ethnos, a center-left newspaper, said the attack was an international stigma for Greece as it was “the first against an Israeli Embassy for twelve years at the world level.” (For its part, Proto Thema, a weekly tabloid, reported on the involvement of Mossad in the investigation, indirectly implying that Greek authorities would not necessarily be able to locate the suspects.)

Even when covering the Israeli-Palestinian conflict, Greek journalists are no longer exhibiting the automatic pro-Palestinian bias of previous years. Operation Protective Edge in 2014 did not generate the usual aggressively anti-Israel press coverage. Eleftherotypia used the word “invasion” but attached no great significance to it on its front page. TA NEA did not mention it on the front page at all, and Hi Kathimerini opted for the more neutral phrase “Israeli bombardments in Gaza.”

After 2015, an additional barrier tarnishing Israel’s image in Greece was removed. A leftist government, Syriza, came to power, bringing with it a new prime minister, Alexis Tsipras. Though he had participated in pro-Palestinian demonstrations in the past, his tune changed when he assumed his new position. In contrast to his pre-election stance, Tsipras treats Israel as an ally, and his foreign policy is reflected in media coverage on both left and right. The Journalists’ Newspaper, for example, which replaced Eleftherotypia, praised the Trilateral Thessaloniki Meeting of June 2017 for accelerating the construction of an East Med pipeline.

Broadly speaking, Greek journalists are now more mature about Israel. In the aftermath of the “Arab Spring,” even the most pro-Palestinian journalists covering the Israeli-Palestinian conflict acknowledge Jerusalem’s contribution to regional stability. Also, official visits to Israeli cities have left participants impressed by the country, and this is penetrating into their work. Other Greek media representatives have turned their attention entirely to blaming Germany for the Greek drama, and see no need to construct other “enemies.” Still others are affected by rising Islamophobia, rather than anti-Semitism, as terror attacks plotted by ISIS continue to strike Europe.

The improving image of Israel in Greece could theoretically go hand in hand with a reduction in anti-Semitism. In 2014, the Greek parliament voted in favor of a new anti-racism law that made Holocaust denial, inter alia, a criminal act. Numbers cannot confirm this, though, as some stereotypes grounded in the thinking of older generations have deep roots. Greece has not experienced endemic violence against members of Jewish institutions, but the authorities are nevertheless in search of measures to eradicate anti-Semitism. When Speaker of the Greek Parliament Nikos Voutsis visited Israel last January, he signed a declaration to combat anti-Semitism. Politicians such as the vice president of the conservative New Democracy party, Adonis Georgiadis, have decided to publicly apologize for their anti-Semitic pasts. Those who sympathize with racist points of view find themselves politically isolated.

This process will take time, of course, because it is principally related to school education. But the change in coverage of Israel by Greek journalists is a good omen.
Posted by Steve Lieblich at 6:14 pm No comments: Links to this post